Anaktora, the area between Vasilissis Sofias and Vasileos Konstantinou Avenue, may appear like a demure residential neighbourhood. But there’s nothing humble about it. Within a two-kilometre perimeter, you’ll find more blockbuster museums than any other area in Athens.

At the Benaki Museum, soak up a panorama of Greek history, folk art and culture from the prehistoric era to the 20th century. If you’ve got a little more time, head a few doors down to see the world’s most extensive collection of ancient artefacts from the Cyclades at the Museum of Cycladic Art. Also on Vasilissis Sofias Avenue, the Byzantine and Christian Museum is a trove of religious art and artefacts from icons to altar pieces, surrounded by one of the city’s loveliest secret gardens. If you’re into military paraphernalia, the National War Museum tracks Greek history through its military conflicts. (Allow for a bias towards success rather than defeat; the museum was erected by the junta as a “monument to Greek valour and military prowess”.)

Recent years have delivered three more compelling reasons to add the city’s museum district to your itinerary. First came the long-awaited Goulandris Museum of Contemporary Art which opened its doors in Pangrati in October 2019. Here, visitors to Athens may gaze upon masterpieces by the likes of Cézanne, Van Gogh, Gauguin, Monet, Degas, Rodin, and Picasso, alongside works by famous Greek painters. Unearthed during construction at the gallery’s initial intended site was Aristotle’s Lyceum - one of the three famous philosophy schools of ancient Athens. It was here that Aristotle once strolled, discussing philosophy and mathematics with his students. And finally, cementing the district’s status as a nexus of both ancient and contemporary culture, the country's flagship art repository, the National Gallery, reopened in spring 2021 after a bold makeover.

This downtown neighbourhood isn’t just about museums though. It’s also a corridor of political and financial power, lined by the city’s most exclusive real estate. These local sights and landmarks are definitely worth checking out in between museum-hopping.

The Presidential Mansion and the Prime Minister’s Office

Executive power is concentrated in two splendid mansions midway down Irodou Attikou, a surprisingly tranquil street running alongside the National Garden. It’s subtly symbolic that the premier’s quarters sit just inside the gated grounds—and thus more directly accessible to the people—while the more aloof presidency is separated from the street by a wide lawn.

Evzones stand sentry outside the Presidential Mansion, designed in 1890 by Ernst Ziller as the palace of Crown Prince Constantine, but used as the president’s ceremonial residence since the monarchy’s abolition in 1974. Between state visits, the building lies dormant, except for visitors outside taking snaps of the hourly changing of the guard. Next door, the Prime Minister’s office is a hub of activity, with the media often camped outside. Known as the Maximos Mansion, it was built in 1924 as a private home. While nominally the premier’s official residence, no head of government has ever lived in it.

An evzone stands guard outside the Presidential Mansion.

This sleek marble paean to the Bauhaus style was left to languish for nearly 50 years before its 5,000-square-metre music halls and stunning 150-metre porch teemed with melodies and people. Commissioned in 1959 from Jan Despo, a Greek student of Walter Gropius, the Conservatory (or Odeio, as it’s known locally) had the bad luck of being completed in 1971, four years after the junta seized power in Greece. Deemed too ‘foreign’ by the dictators, it was tainted by their brush and was not officially inaugurated until 2016.

Student activity often spills out of the 35 classrooms and two auditoria, with impromptu performances delighting young visitors to the small Hellenic Children’s Museum, housed on the ground floor. Occasional exhibitions and art fairs (such as the annual Art Athina) in the lower level gallery add to the creative vibe.

Commuters streaming from Evangelismos metro station trample Samuel Beckett’s Cascando, whose verses are used in an installation by artist David Harding, oblivious to the delights of this small urban park. Originally the grounds of the Rizarios Seminary, this wedge of greenery contains Roman remains, works by top contemporary artists like Giorgos Zogolopoulos, and one of the city’s oldest modern sculptures—a marble bust of Enlightenment scholar Neophytos Doukas by Christian Hansen. The Rizarios seminary was founded in 1841 by an Epirot merchant in Odessa who helped to fund the Greek War of Independence. The silver-domed Agios Georgios church next to Evangelismos station was part of the seminary. As well as interior murals by the 19th-century Corfiot artist Eleni Prosalenti, the church crypt contains Rizarios’ remains.

Rizari Park is the perfect spot to take a quiet moment for yourself.

The stunning Runner statue, right in front of the Athens Hilton.

No other spot in Athens offers such a concentrated view of the city’s architectural evolution than the small triangle occupied by Costas Varotsos’ expressive, oversized sculpture made entirely of dark green glass. The Runner was installed here in 1988, a harbinger of Athens’ perpetual modernisation as its expansion continued beyond the city limits set in 1884 when the Evangelismos Hospital was built. The first wave of expansion during the interwar years heralded the apartment buildings with their characteristic protruding elements, or erker, across the street. The Athens Hilton, as much landmark as hotel, marks the second: the post-war reconstruction when the city shook off its neoclassical design. This radical leap into modernism is sealed by Yannis Moralis’ expressive ‘etchings’ along the hotel’s western facade.

Greek civilisation did not end three millennia ago. If you’re looking for a connection between ancient and contemporary Greece, it’s easy to find at the National Gallery. Yannis Tsarouchis’s 1941 Head of Youth is a modern-day portrait of the kouros (the nude statue of idealised youth). Panagiotis Tetsis’s 50-metre mural Street Market (1979-1982) is a colourised version of the ancient Agora. Look closely at any of the 20,000 works in the National Gallery’s collection and you’ll see the threads joining Greek artistic creation through the centuries, a celebration and study of the human body, light, and topos.

Arranged chronologically by period, the paintings and sketches walk you through both the suffering and celebration that composes Greek history, each chapter illustrated in a distinct visual style from the transition of the religious art of Byzantium to a more open, liberated vision of Greece and the Greek soul. But you don’t have to wax philosophical. Just let the mood of each painting wash over you and enjoy the celebrated Greek light that pours into these long gallery spaces, thanks to the artful new design.

The National Garden and Zappeion

Created in the mid-1800s as the pet project of Queen Amalia, the former Royal Garden has been a focal point of Athenian life since it was declared a public space in 1927. The 158,000-square-metre park contains an impressive collection of plants—over 500 species—most imported from as far away as China and Guatemala, and arranged for effect like the striking row of Delos palms near the Amalias Gate. These botanical riches attract birds, from parrot colonies to woodpeckers and Europe’s only wren species. Ivy-entwined, wrought-iron gazebos and secluded benches create a romantic backdrop for courting couples and picnics.

The adjacent Zappeion Park is to families what the National Garden is to lovers. Fanning out from the horseshoe-shaped hall, which is used for exhibitions and formal receptions, the grounds are abuzz with activity from book fairs and small expos. You’ll usually find crowds of locals strolling in the shade, chilling at the upmarket café-restaurant, or taking in a film at the open-air cinema. There’s a sports park for kids too, with a climbing wall, trampolines, volleyball, tennis, basketball and football courts. 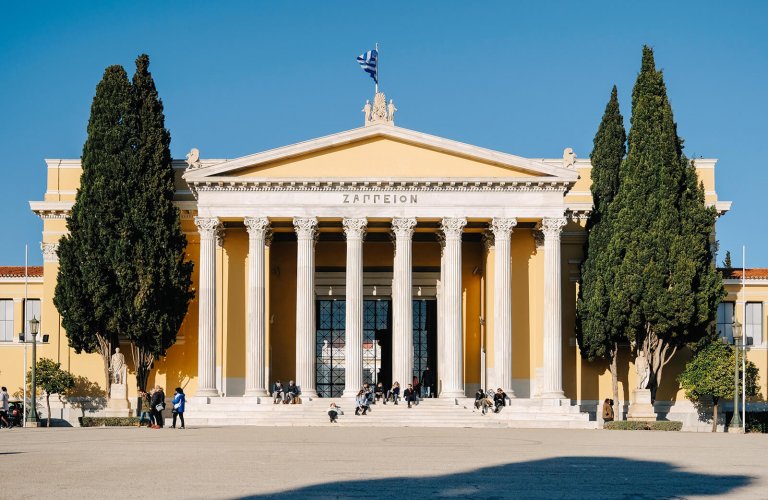 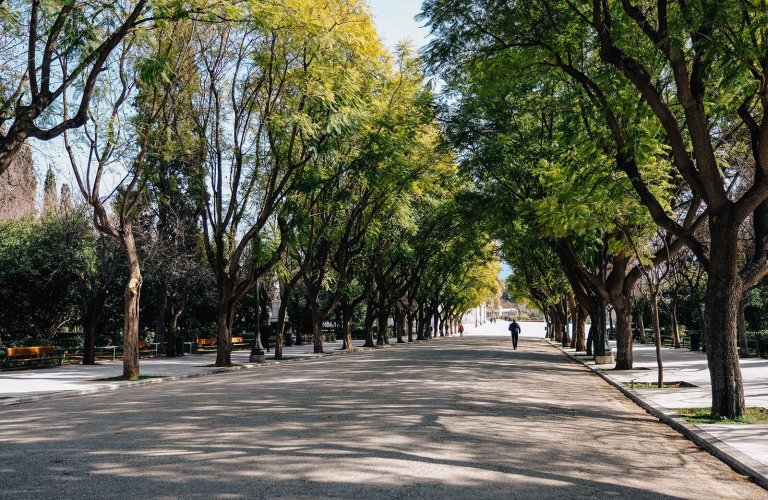 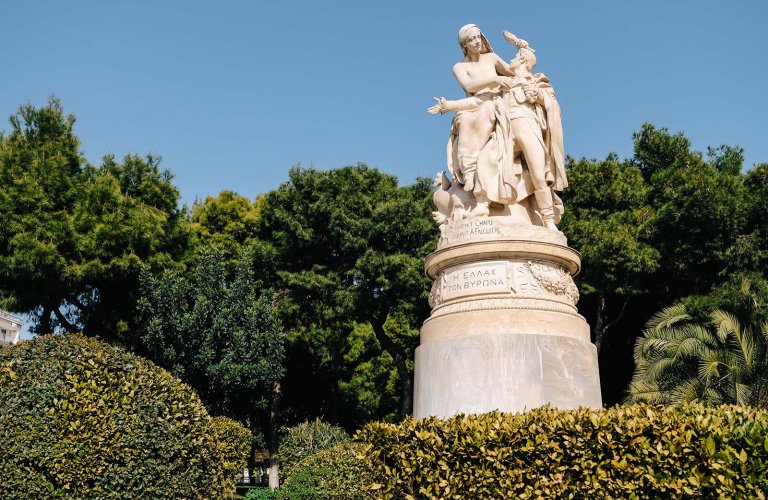 The hall at Zappeion.

This tree-lined path is perfect for a stroll any time of day.

Always remember to look up when walking through the Garden.

The Byron Statue at the National Gardens.