Every Athenian knows Omonia Square and what it means to the city. A traffic hub. A rendezvous point. A symbol of modern Athens. But ask five Athenians where Omonia actually starts and ends and you’ll probably get five different answers. That’s because, aside from its landmark square, Omonia is not an official area that you can point to on a map. It’s more a state of mind; a certain brand of eclectic energy and yep, occasional dissonance.

Think of it as a wheel with five spokes, radiating out from Omonia Square for several blocks around Athinas, Stadiou, Panepistimiou, 3is Septemvriou, and Agiou Konstantinou Streets. Omonia also shares bragging rights with Monastiraki over the Athens Central Food Market and taste hub Evripidou Street.

All the moving populations from across Greece and abroad have traditionally gravitated to Omonia, lending it fresh flavours and urban texture. Ungentrified and lively, this is the oldest limb of the modern metropolis—a place where no-frills Greek classics sit next to ethnic eats, 60s office blocks and old printing presses. Omonia is not Athens’ prettiest face. Certain parts are distinctly run down and gritty. However, big change is in the air: starting with the latest revamp of Omonia Square by the City of Athens and smart new hotels like Brown Acropol at 1 Pireos Street (a rebranding of the iconic Acropol hotel), and Selina Athens Theatrou, an upbeat hospitality and co-working hub in an old Greek insurance building. These worldly arrivals are bringing rooftop bars and cool cafes and are sure to alter the beat of this working class district that typically packs up its wares at the end of the day and turns out the lights. Omonia—as the planned origin for the new 6.8km Great Athens Walk—will also play a key role in the birth of a more pedestrian-friendly Athens.

“In a few years’ time, Omonia will be a very different place,” predicts local blogger and long-time Omonia resident Tasos Chalkiopoulos. “I see a lot of great potential here.”

With a little help from Tasos, we share some of our favourite Omonia finds so that you can get under the skin of this charismatic pocket of Athens.

Any introduction to Omonia can only begin at Omonia Square. It’s not a square in the usual sense. There are no bars or cafes to linger at; no shady trees to shelter under. For Athenians, Omonia Square is a meeting point; a nexus to set out from (or cheer major sporting victories at). In the 60s, this emblematic square was a magnet for cosmopolitan Athenians who came to shop at the famous Minion department store (until fire crippled it in the 80s); now the square has just been revived with a focal point fountain sporting 188 jets. When passing through this humming thoroughfare, make sure to survey the towering hydrokinetic steel sculpture. It’s by the fêted son of Omonia, George Zongolopoulos, and he created it when he was 100. “Since the fountain went back in, Omonia has become more of a meeting point again,” says Tasos. “Syntagma Square is more formal. Omonia is the people’s square.”

Nature springs up in the urban centre of Athens.

A couple of blocks down Athinas Street, an impressive glimpse of an elegant old Athens appears. Welcome to Kotzia Square (or Platia of the Dimarchio), home to the Athens City Hall. Classy old buildings frame the square and Sophia Vari-Botero’s modern bronze statue peeks out between cooling fountain flumes. Mighty Pericles, created by sculptor Heinrich Faltermeier, presides over the Town Hall courtyard, opposite. “Kotzia square has the flavour of an Italian piazza,” says Tasos. “All this open space is rare for Athens; in the early evenings, it’s very beautiful here.”

Also sharing quarters with the Mayor of Athens are ancient tombs, a length of road from Classical Athens and a flank of a 5th century BC wall—all uncovered during modern building works. Take a moment to appreciate the two very different, very striking National Bank of Greece buildings fronting pedestrianised Aiolou Street. Modern and neo-classical Athens hold hands and the beauty isn’t just skin-deep. Inside the flagship branch, customers queue below a rich trove of original paintings, featuring heroes of the Greek War of Independence. “It’s a fantastic find for visitors because it’s not a touristic spot,” says Tasos. “It’s like browsing a history book.”

On tasty Evripidou Street, look out for a peculiar sight at number 70. Behind a black and gold gate, a tiny mustard-coloured chapel nests under a leafy canopy. Agios Ioannis is so humble it could pass for a garden shed. But wait. What’s that protruding through the corrugated tile roof? Only an ancient Corinthian column, completely intact. This doll’s house church was built atop the foundations of the ancient river of Eridanos and was allegedly founded in 565 AD, making it one of Athens’ oldest Christian churches. Step inside the cool incense-scented alcove to light a candle and admire the icon-covered walls.

A painted sign signals you in to Agios Ioannis.

A cathedral on the cutting-edge of ecclesiastic style.

At the opposite end of the spectrum is the late 19th century Cathedral of Agiou Konstantinou. You’ll find this imposing Hellenistic-Renaissance hybrid on the street of the same name, opposite the National Theatre of Greece. Hewn from stern marble, it sits on a marble square with marble benches, and has always been an ecclesiastic outlier. “Its style was quite experimental at the time,” says Tasos. “Visitors regard it as the most western-style cathedral in Athens.” Every Easter Saturday, Agiou Konstantinou swims uptide by hosting a resurrection mass at noon, instead of midnight, as is the ritual elsewhere in Greece. “You’ll hear Athenians line the steps outside clapping in celebration,” says Tasos. 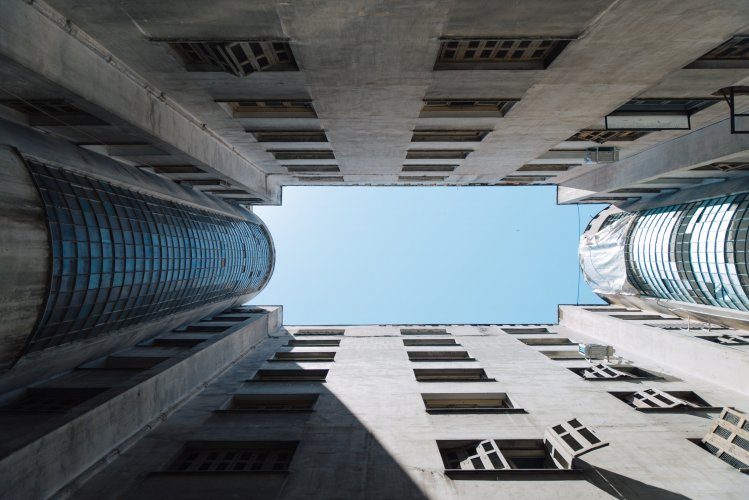 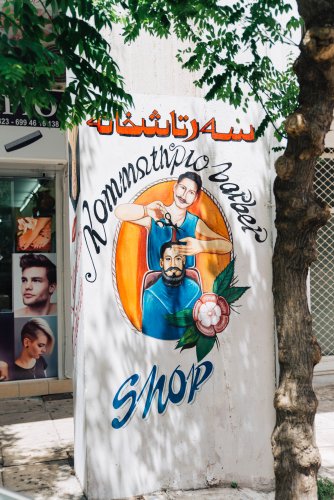 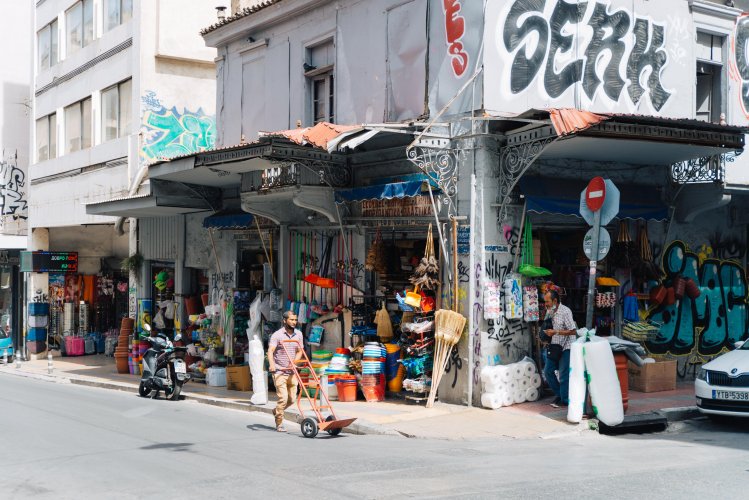 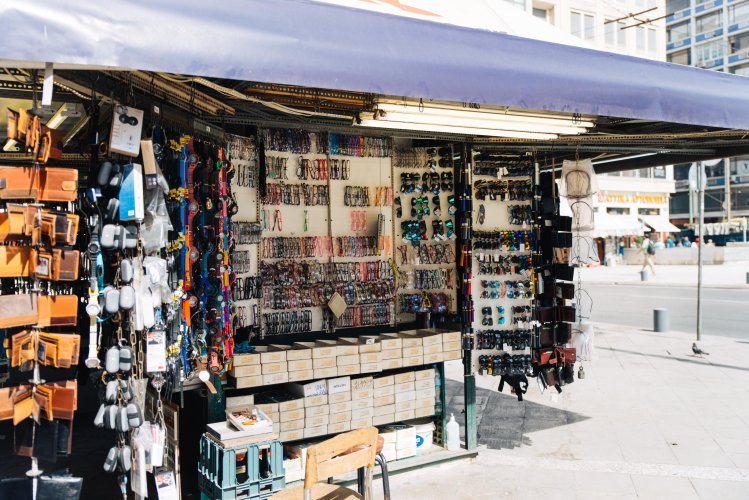 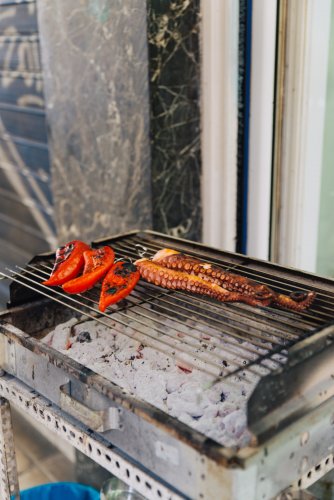 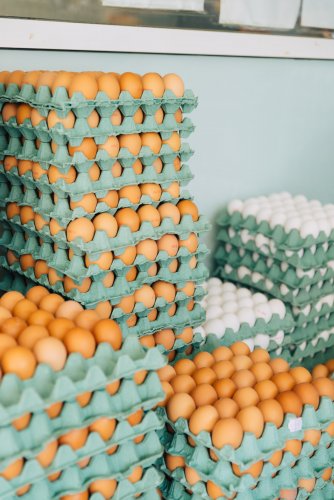 A peek of blue in an urban jungle.

Shave and a haircut Omonia-style.

Colourful products spill into the street.

Street stalls are part of the pulse in Omonia.

Peppers and octopus getting a quick sear.

Come for the eggs, stay for the exotic eats.

No agonising over the menu at Telis. This humble legend at 86 Evripidou has just three things on it and everyone from prime ministers to pop stars goes for the famous grilled pork chops. Enjoy them with a cold Greek beer and a hot mess platter of feta, tomato and peppers, pulled from the oven. “I used to come here all the time as a student,” says Tasos. (Inside scoop: you'll find two adjoining Telis shops at the same site. Go to the one on the right, when facing the street corner - it's the original and the best, according to popular opinion).

You can ditch the menu completely at Tis Theatrou to Steki, a slap-up workers’ canteen on a shady stretch of pavement behind the Varvakios Market, at 7 Theatrou Place. Just ask owner Varesis to load up your plate with whatever’s good that day. Gigantes, sardines, meatballs, octopus … it’s all delicious (and super cheap). A sea of whiskery old men will sip ouzo around you as you tuck in.

When Austrian master architect Ernst Ziller was tapped to shape the new Greek capital in the late 1800s, his European stamp began appearing all over the Historic Centre. Witness the magisterial portico windows and graceful columns of one such shining example: the National Theatre of Greece, on Agiou Konstantinou Street. Even better, check the website to see what’s on for your chance to catch some excellent Greek drama with English sub-titles inside this neo-classical grande dame (it could be anything from Aristophanes to Dickens).

You won’t have to search hard to clock the famous Praying Hands of Omonia. Inspired by 16th century German artist Albrecht Dürer, the God-like 600 square meter mural by Pavlos Tsakonas seizes every passing eye. It appeared on the wall of the Hotel Vienna at 20 Pireos Street over 11 days in 2011, an optical balm in the storm of the financial crisis.

There’s no excuse for dull or disappointing “make do” meals in Omonia. Not with multicultural treasures like Pak Tikka Grill House dishing up some of Athens’ best Pakistani cuisine at distinctly non-tourist prices. Go for their aromatic house favourites like chicken biryani, daal or beef karahi. Forego a fork and scoop it all up with their super fresh nan; then chase it down with a delicious mango shake.

For a tasty lunch on the go, Vathis Square is your ground zero for authentic Lebanese falafel, expertly executed on the spot. At Al Sharq Anatolitiko, you can’t go wrong with the falafel with eggplant or the classic falafel wrap with all the trimmings (don’t skimp on their home-made chili sauce). Omonia also has some terrific ethnic grocers where crafty home cooks can stock up their pantries at knockdown prices. At Egyptian supermarket Kleopatra on car-free Kratinou Street (opposite Kotzia Square), you’ll find fantastic fresh pita, halal meats, guava juice and clarified margarines imported from Egypt; while the Dhaka Bangladeshi mini-market is a top spot for chicken tikka kits, Tunisian dates, bulk quantities of spice (at tiny prices), and rare-for-Athens produce such as the funky karela bitter melon (an Asian superfood that’s great in curries).