Koutoukia: The Underground Tavernas of Athens

Click here to stay updated on the latest COVID-19 measures regarding eat & drink and entertainment spaces.

Back in the days when it was a Greek cultural norm for women to be occupied primarily with matters of the home, it was customary for men to do their socialising alone. The kafenio was a favourite venue. Simpler times called for simpler menus and these traditional cafes usually served coffee, Greek spirits like ouzo, raki or tsipouro, and a few small dishes (mezedes). Men hung out talking politics, smoking cigarettes, playing backgammon. And this is what the scene would look like until late afternoon, when the kafetzis (the man made the coffee, waited tables, and ruled the roost) closed up shop. So now where were the gentlemen to go?

Enter the koutouki. The word has roots in the Turkish word kutuk, which roughly translates to ‘familiar.’ In their heyday in the 1950s and 60s, koutoukia were places where you could feel at home. A space to relax, socialize, to reflect, argue, eat, and drink in good company. This atmosphere of familiarity and ease, and the fact that initially most of these humble taverns were in basements, also allowed for illegal substances (mostly cannabis) to be passed around freely. The highlight of the otherwise minimal décor were the wooden barrels with little taps, where the wine would age for as long as it had time to before it was poured into tin carafes and served to the patrons. A few mezedes would appear on tables to balance out the booze. When the mood struck, musicians might take out their instruments and fill the air with the pain and sorrow of rebetika, the Greek blues. Just like kafenia, koutoukia were for men only, give or take a few women with questionable reputations.

Head underground—literally—to check out another side of Greek dining.

The entrance to Diporto isn't always easy to find, but follow the music.

The most sought-after spots were the tables next to the wooden barrels as if they didn’t only mature wine, but also helped ingenious ideas come to life. It’s where Lefteris Papadopoulos sat when he wrote the lyrics to songs that generations of Greeks have grown up with, Tha pio apopse to fengari (Tonight, I’ll drink the moon) andVrehei fotia sti strata mou (It’s raining fire in my way), while eating a plate of chickpeas with rice. In lean economic times, it wasn’t unusual to hear the word oligi spoken quietly by the waiter as he placed orders to the kitchen, suggesting that the patron wanted only half the regular portion.

“In the underground tavern, between the smoke and swearing, (above the screaming barrel organ), we friends drank yesterday, yesterday like all other nights, to drown our sorrows,” wrote Kostas Varnalis in one of his most famous poems. While modern nightlife has wiped out many of the old koutoukia, the one that Varnalis refers to is still open and unchanged. It’s right behind the Varvakios Agora, Athens central food market. Walk to number 9 on Sokratous Street, look down, and you’ll see two large doors that lead to a basement. And a time warp. Drink wine from the barrels (they make their own), peek into the humble dishes cooking on the stove (try the chickpeas and the sardines), and live the atmosphere of a real, underground koutouki, Diporto.

Besides this classic institution, there are similar secret cellars scattered around Athens. On Dekeleon Street in Gazi, Inomagirio tis Alexandras has been serving dishes heavily inspired by the tastes of Constantinople for 20 years. Except for the usual wine, you can also try the stronger tsipouro to accompany the lahmacun with aubergines, politiki salata (salad of pickled cabbage, peppers, and carrots), and lamb and potatoes baked in wax paper. If you go on a Sunday afternoon, be prepared for the sounds of traditional clarinets.

Plaka also has a couple of these time tunnels. Bakaliarakia tou Damigou is famous for its namesake dish: fried cod (bakaliaros) with skordalia (a garlicky dip made with potatoes or bread). A bit further up on the same road is Saita whose menu features classic Greek dishes such as pastitsio, moussaka, soutzoukakia (spicy meatballs in tomato sauce) and papoutsakia (‘little shoes’, or aubergines baked with cheese). Be sure to order chips on the side, either plain or sprinkled with feta cheese. Both koutoukia are, of course, in a basement. 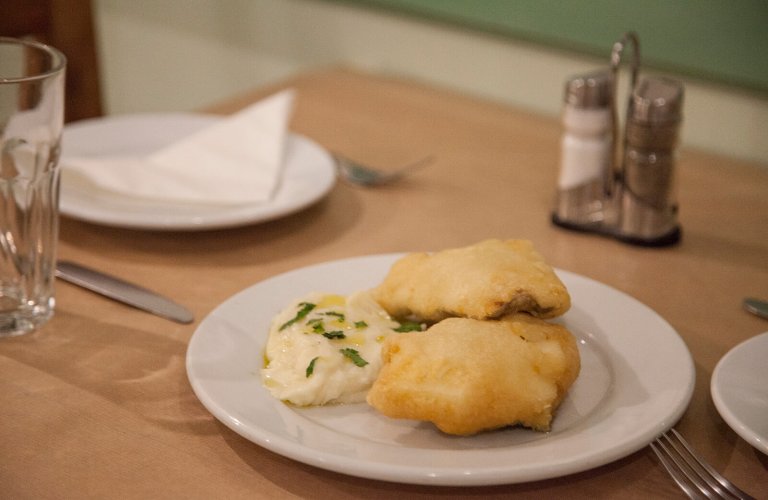 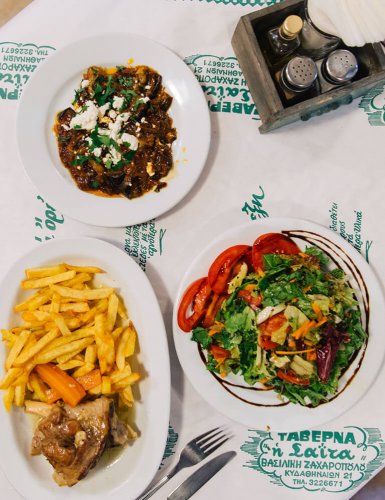 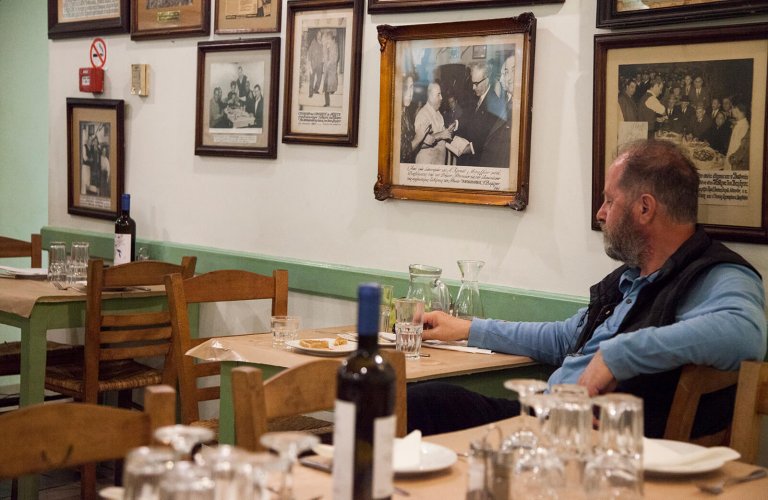 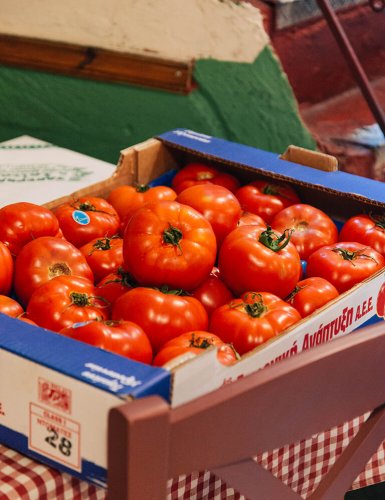 A plate of fried cod with skordalia at Damigos.

A balanced meal over at Saita.

A quiet moment at the koutouki table.

A box of tomatoes at Saita.

This white building houses one of our favorite koutouki in the city.

Another great spot is Leloudas in Rouf. This koutouki has been in the same place since 1928. Even though the two steps you need to go down to enter don’t make it a koutouki by definition, everything you’ll find inside does. Wooden barrels, traditional food, and an atmosphere that takes you back to Athens of the era between the two world wars. The neighbourhood is also worth exploring, even if you’re unlikely to find it in tourist guides.

If you want to throw some live folk music into the mix, try Marathonitis in Pangrati. Here you get strong house wine, grilled lamb chops, and an experience that you may talk about more than the Acropolis when you get home.