Piraeus is much more than just a port. It’s a city in its own right. Yet most visitors fleetingly pass through on their way to the Greek islands and see little beyond the smoggy hustle of the ferry terminal. Take time to explore and you’ll find archaeological sights, stunning sea views, as far as the Saronic Gulf islands; and some of the best fish restaurants in Athens.

Piraeus was first incorporated into Athens in 515 BC. In 493 BC, the great naval strategist Themistocles began fortification works to enclose both cities behind Long Walls. These defences, still visible today, gave the Athenians uninterrupted access to the sea. Over three millennia, Piraeus has grown to become one of the largest passenger and cargo ports in the world. There’s more to this commercial hub and gateway to the Greek islands than meets the eye. Whether you have a few hours to kill before your onward journey or a full day (or more) to explore the area, this guide will help you get the most out of Piraeus. 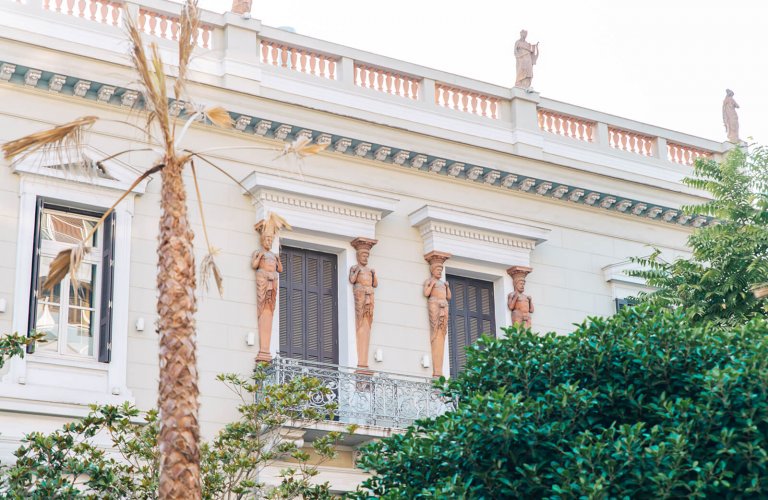 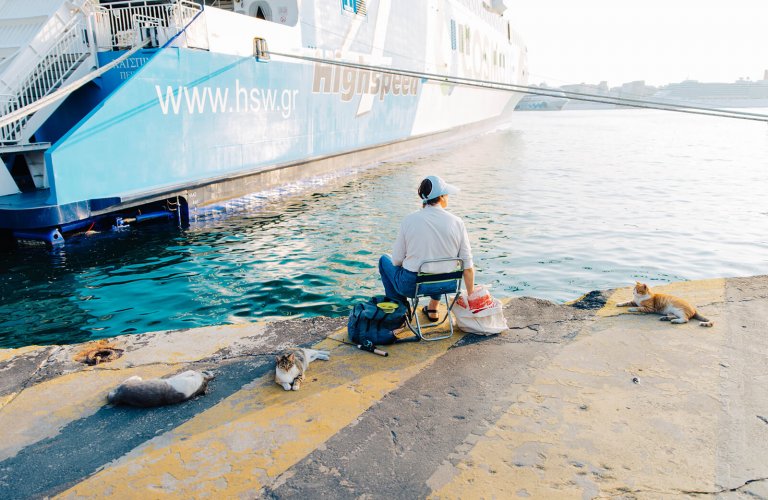 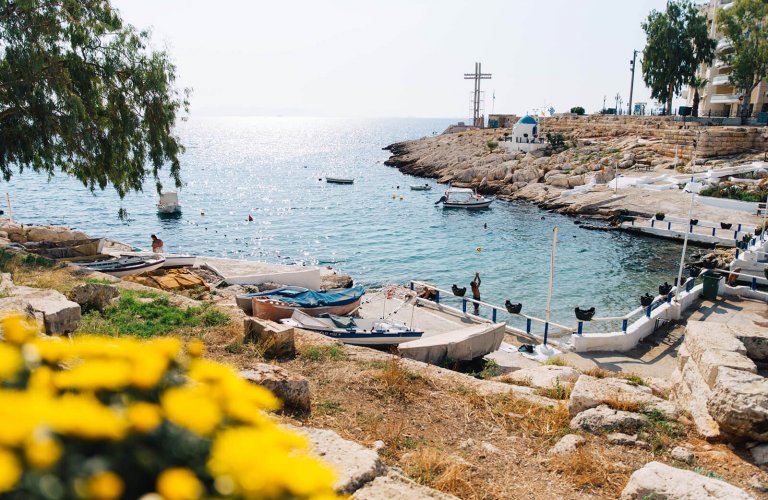 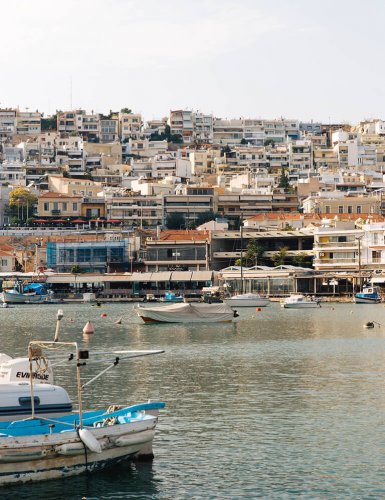 Neoclassical is the word in Piraeus.

Waiting for your ship to come in.

Peiraiki is a cool oasis amid the Piraeus hustle.

Inside Piraeus metro station, the Electric Railways Museum of Piraeus is free. Highlights include a wooden metro carriage from the turn of the 20th century, and a collection of rarely-seen black-and-white photography of Piraeus and Athens from the same period.

Perched on a ridge, the well-preserved fortifications of the Ietonian Gate were developed between the 5th and 3rd century BC. This easily accessible site overlooks the harbour and nearby Liberty Ship Hellas, a floating museum that provides a history of the Greek merchant navy.

Trainspotters can see carriages both past and present at Piraeus railway station.

As fresh as it gets.

The ungentrified, post-industrial area north of the port, Retsina is emerging as a new cultural quarter. Rodeo Gallery, which relocated from Istanbul to a cavernous former warehouse, shows a thought-provoking, avant-garde roster of artists from Greece and abroad. Beirut-born Carwan Gallery is the latest organic addition to Piraeus' gallery district, and promotes and produces collectible design, developing exceptional cross-cultural collaborations that call to attention a specific market—the Near East. Next door, Paleo Wine Store another repurposed warehouse with a striking wooden roof, offers an impressive selection of Mediterranean wines, paired with Greek cheeses and unpretentious tapas. In a former sheet metal factory, Pireé has a decadent ambience and a great cafe and cocktail bar, which bubbles with art events, performances and pop-up exhibitions. This dynamic area comes alive Thursday-Sunday when Rodeo is open and the surrounding bars and restaurants brim with a cultured crowd.

Early on a Sunday morning, you can pick up an incredible range of bargains from retro fashion to fine antiques at the Piraeus Flea Market, which stretches beside the metro line along Alipedou and Omiridou Skilitsi Streets. Go as early as possible to scout the best pieces.

Around the station, you’ll find plenty of options to pick up a coffee or a quick snack. If you’re looking for something substantial for your journey or to take home, Mandragoras and Miran Deli offer a fantastic range of Greek deli produce, from olives to dried herbs and cured meats. In an historic arcade, Rakadiko does really good taverna food, sometimes accompanied with live music. Try the buffalo meat souvlaki wrapped in wholemeal pita and Cretan pasta served in a wheel of aged graviera cheese.

Check out the spectacular post-WWII reconstruction of the historic Agia Triada Church, Municipal Theatre of Piraeus and Municipal Art Gallery of Piraeus, before wandering through the mostly-pedestrianised shopping area south of Korai Square. Arlekinos serves hearty Greek fare along with craft beers from the local Kirki micro-brewery.

Neoclassical splendour at the Municipal Theatre of Piraeus.

Get a new perspective on Piraeus in Kastella.

This breezy neighbourhood perched on top of a hill feels a little like an Athenian version of Lisbon, Valparaiso or San Francisco, with winding stairways and colourful turn-of-the-century buildings. Climb up to the summit to take in the great views from the park surrounding Profitis Ilias Church, with the Saronic Gulf and Athenian Riviera stretching out below. Afterwards, refuel at the quaint cafés and tavernas around Idis Street, like O Kalognomas ouzeri.

Greek for ‘little port’, Mikrolimano is nestled beneath Kastella. Its biggest draw is the Michelin-starred Varoulko Seaside, presided over by celebrity chef Lefteris Lazarou. If that’s out of your budget, the cute houses that lead up the hill and the bright fish tavernas that ring the port are an aesthetic delight. Mikrolimano may be dwarfed by its neighbours Marina Zea and Piraeus port, but it has more of an upmarket island vibe.

A perfect spot for Sunday strolls by the sea. Or Monday or Tuesday...

Stretch your legs at Marina Zea.

Marina Zea has the relaxed air of a well-to-do port town, with fancy yachts moored alongside lively cafés, restaurants and bars. This was the main shipbuilding area in antiquity; if you keep your eyes peeled you can still see evidence of ancient Greek and Roman fortifications. The most impressive are the ancient ‘ship sheds’ where hundreds of warships were housed, part of a massive naval base that was recently uncovered by underwater archaeologists. The Archaeological Museum of Piraeus, on the other side of the marina, puts everything into context, with statues, artefacts and sculptures discovered in the area. Combine it with a visit to the Hellenic Maritime Museum to obtain a sea-borne perspective on Greek history.

Give yourself an hour to walk around the Peiraiki peninsula. The coastal road has lovely views of cruise ships and cargo vessels silhouetted against the islands of Salamina and Aegina on the horizon, and locals fishing from the rocky shore below. The Peiraiki seaside strip and the nearby backstreets of Hadzikyriakion are where most locals go for affordable, authentic seafood in Athens. For a stellar fish taverna, head inland to Margaro, next to the Naval Academy, where you eat whatever is cooking, with convivial white wine and free orange pie to follow. Nearby Yperokeanio is a tiny fish tavern, where you can tuck into delicious braised octopus and sardines on toast surrounded by vintage knick-knacks. Or stop at Ta Vrachia tis Peraikis to watch the sunset with a plate of fried calamari.

Snap. Bet you can't resist this Peiraiki photo opportunity either. 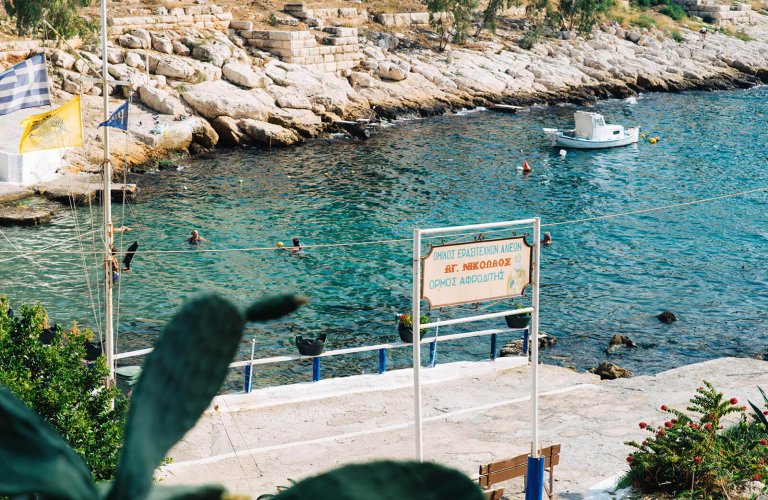 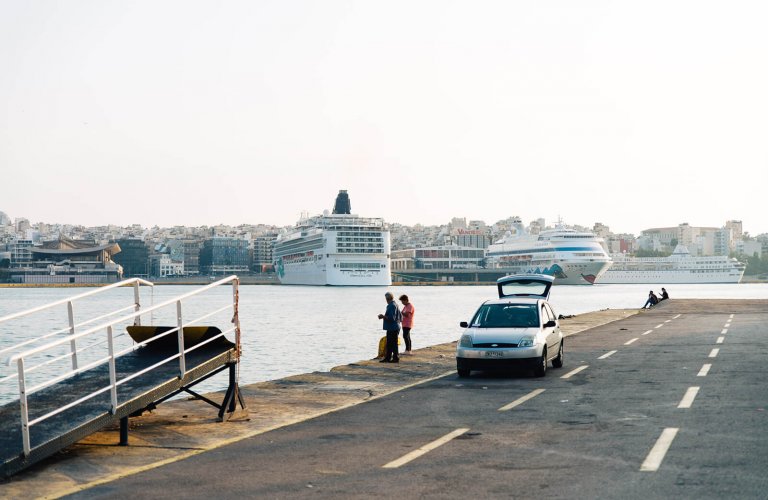 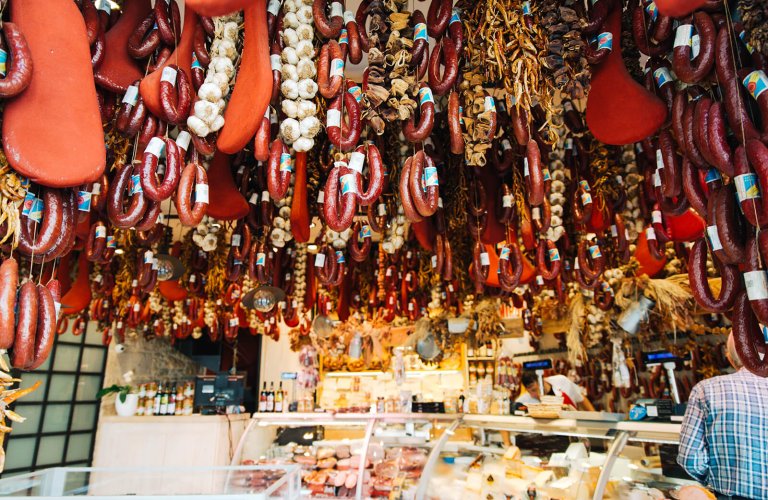 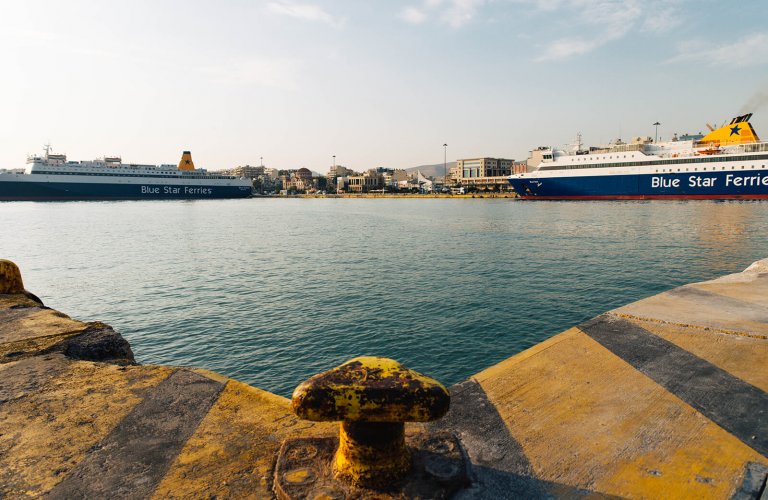 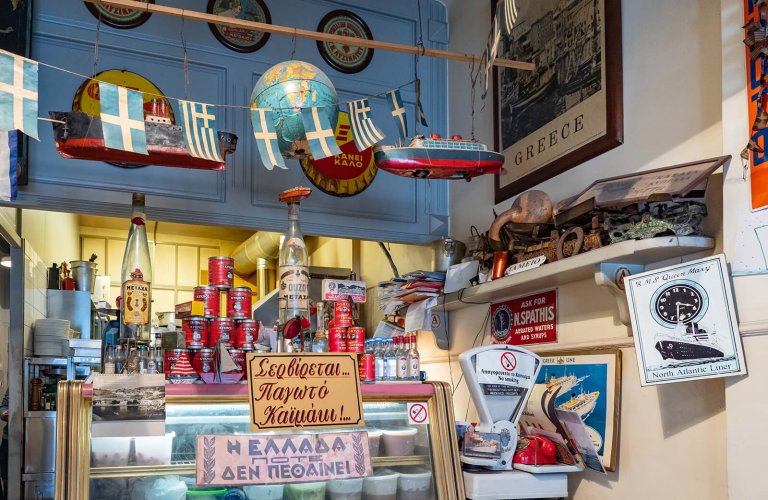 You'll feel like you're on a Greek island at Peiraiki.

Thousands of journeys begin and end every day in Piraeus.

Miran Deli. You could almost call it art.

The sea has always shaped Piraeus.