A Tradition of Counter-culture

Despite the large numbers of transients Exarchia attracts, this jumble of pre-war townhouses and ageing post-war apartment buildings preserves a strong sense of community and tradition, with publishing houses, bookbinders, the city’s liveliest farmers’ market, rembetiko tavernas, punk boutiques, old-fashioned coffee houses, bars, a self-managed park, the National Archaeological Museum and delightful Epigraphic Museum, all within its boundaries. Inexpensive rents account for the district’s popularity among students and anti-gentrification fifty-somethings who bask in the memories of their own rebelliousness. Built into the slopes of Lycabettus Hill, Neapoli, the city’s second oldest neighbourhood after Plaka, acts as a buffer zone between Kolonaki, disdained by Exarchia’s denizens as the bastion of the bourgeoisie. (Keep in mind that confrontations with police do erupt spontaneously at times in Exarchia, and protests can flare into street clashes.)

Kallidromiou Street on a laiki day.

Exarchia Square may be the hub of the neighbourhood’s (often riotous) activity, but Odos Kallidromiou is its heart—and you can feel this as you stroll its mulberry-shaded pavements. This street, which surges then sinks as it hugs the western incline of Lycabettus Hill, transforms itself according to day and hour with the ease of a person donning and shedding a wig. Even the street's name is the result of such whim: officially named Kallidromou after the peak that rises above Thermopylae, locals have stubbornly clung to Kallidromiou—the result of a typographical error. Every Athens neighbourhood has its weekly farmers’ market, but shopping at Kallidromiou’s laiki on Saturday morning is a tradition among urbanites, who haggle over artichokes with the same passion they argue the finer points of politics over an after-market raki at one of Kallidromiou’s coffee houses.

“Site of the 1973 student uprising that precipitated the collapse of Greece’s dictatorship.”

Every November, thousands of Greeks flock to the university’s grounds, not for an academic ceremony but to commemorate the 1973 student uprising that precipitated the collapse of Greece’s dictatorship. The ‘Polytechnio’ has shaped politics and society ever since. But it’s not the building—a mid-19th-century gem of neoclassical architecture—that is the focus of the memorial, but a colossal bronze of a youth’s decapitated head seemingly rolling on the ground. Even if you know little, or nothing, of these events, it’s impossible not to be moved by Memos Makris’ evocative sculpture, "In honour of the victims". Visitors lay flowers here throughout the year, but on November 17, the official commemoration, the bronze is obscured by red carnations. 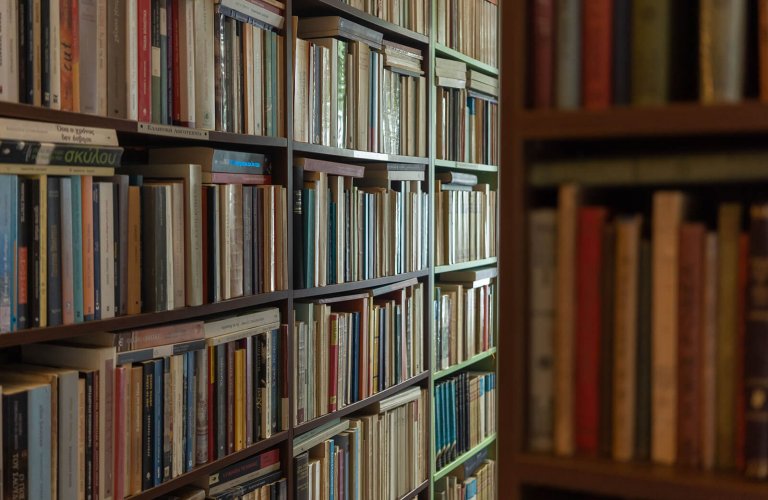 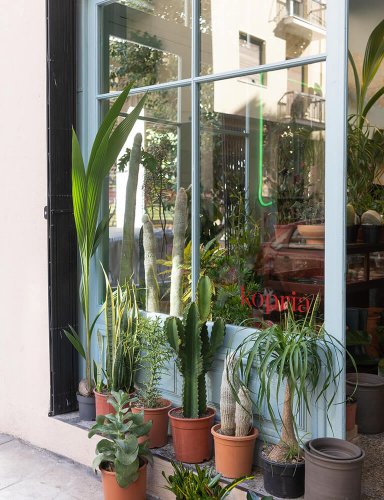 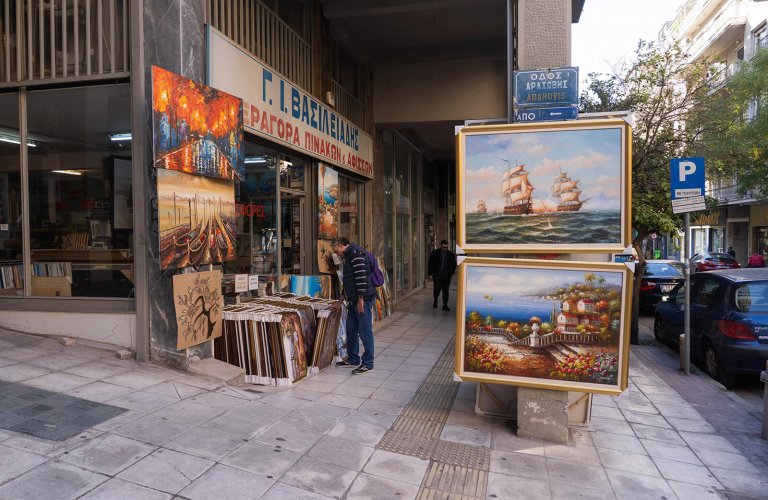 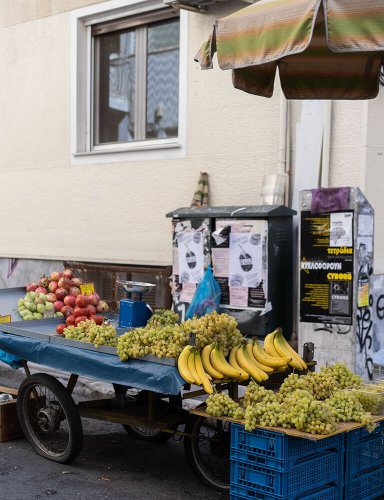 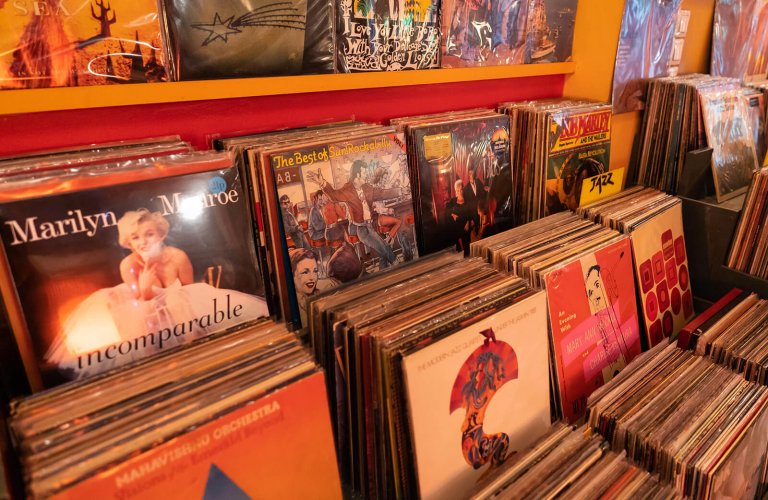 Exarchia is a literature lover's dream, full of publishing houses, bookbinders and shops.

You never know what you'll find wandering through Exarchia.

A fruit cart in Exarchia.

One of Exarchia's vintage record stores.

Even in its most densely-built areas, Athens often surprises with a profusely green space. Agios Nikolaos Pefkakia is one. Named for the thick pines (pefkakia means ‘little pine trees’) enveloping it, the late-19th-century church houses the relics of more than a dozen saints. It is well worth the uphill trek from Exarchia for its massive templon that looks as if it was dipped in gold. The church is equally impressive for its size and the vibrant iconography covering every centimetre of its cavernous interior—an extravagance made possible by benefactor Nicholas Thon, a wealthy landowner active in building the area. His purpose was for parishioners to have a place of worship so they didn’t need to travel far, but his religious devotion doesn’t seem to have been shared by others: Agios Nikolaos Pefkakia remains Exarchia’s only church.

‘Lies and hypocrisy don’t survive long’ reads the quote tacked near the cash register of this no-frills coffee house. Though profoundly political, the quote is about chess—the only ideology at the Panellinion. Tavli, or backgammon, might be a more pervasive pastime, but Greece has a solid tradition in chess. Even if it isn’t your game, Panellinion is the perfect place to soak up the genuine kafeneion atmosphere. Old tables, old photographs, and coffee choices limited to two—Greek or frappé—and an owner willing to whip up an omelette or meze in a heartbeat. Mornings are quieter, with older patrons engaging in leisurely matches; by afternoon, grey heads start to give way to man buns and beards as the younger crowd filters in. Double clocks on the table notwithstanding, time is elastic here, as Panellinion won’t close until the last game is over.

Head to this kafenio if you're looking for a classic Athenian atmosphere.

Building squats are not unusual in Athens, but a parking lot? For a group of locals, the need for more green space in their neighbourhood was as urgent as the need for new housing so, in 2009, incensed by plans to develop this former car park, they occupied it and set up the city’s first self-managed park. Run by an open collective, it has evolved into more of a community centre than just a park, offering not merely swings for kids, but also meals for the homeless, film screenings, and other events. But it’s the greenery that is remarkable: the once barren lot is thick with vegetation—even olive trees—and a communal vegetable patch. The park is hard to miss: just look for a spectacular graffiti illustration of the park’s history by the Italian street artist Blu.

5 Underground Clubs to Keep You Up All Night