Browse by day, bar-hop by night

Old and new Athens converge in Monastiraki. The metro disgorges passengers on Adrianou, a street that is the flea market's main artery but was also part of the ancient city. The city’s historical layers and the area’s traditionally diverse communities align here: look up from the square towards the Acropolis and your line of sight crosses both a mosque and a Byzantine church. Monastiraki, or ‘little Monastery’, is named after a monastic compound that once occupied the site. Today, all that’s left is the small 10th-century Pantanassa basilica on the square.

A wave of gentrification swept most of the old artisan workshops from Psirri and replaced them with bars and eateries in the early 21st century. Now modern craftspeople are moving back in, producing leather sandals and quirky souvenirs rather than wicker chairs and tinware. And derelict buildings have been revitalised with extraordinary displays of street art. But Psirri is still at its most enchanting, and liveliest, at night, when the second-hand shops close and the trendy night-spots set their stools out on the narrow streets. 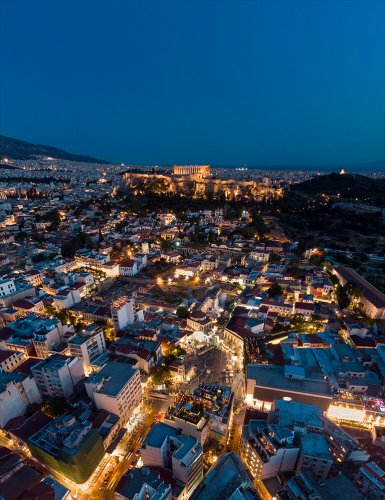 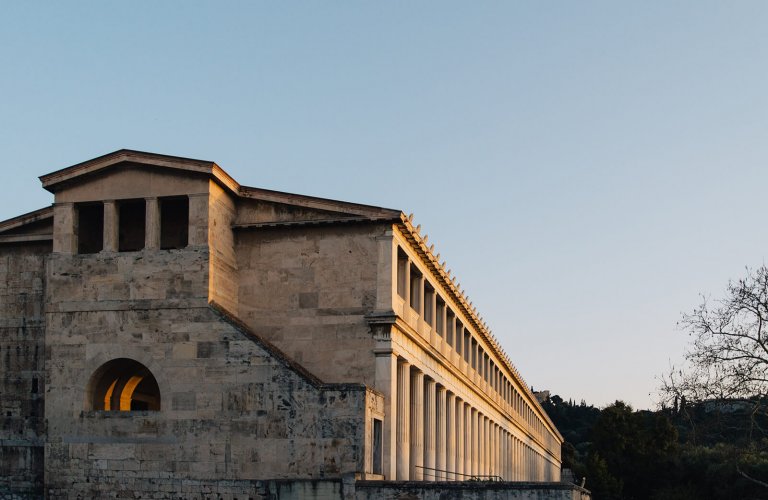 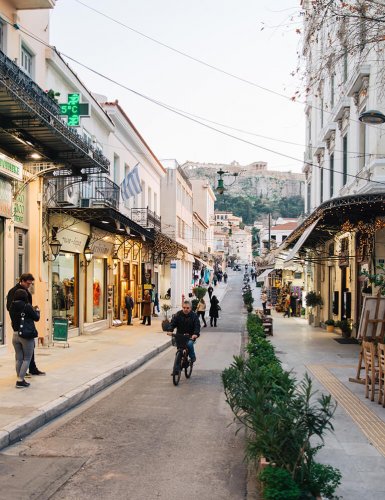 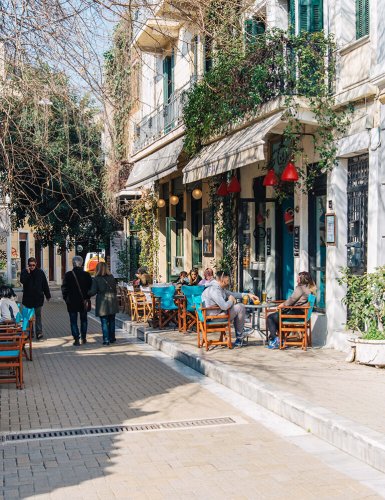 The Stoa of Attalos in Monastiraki.

Rolls of fabric in a local store.

Outdoor seating at a neighbourhood cafe.

On the hunt for a good deal at Avissinia Square.

Avissinia Square sits smack in the middle of Yusurum, the old name for the flea market after the Jewish merchants Noah and Elias Yusurum, who were prominent members of the local antique dealers’ association in the early 1900s. (Today though, all you have to say is Monastiraki and people hear ‘the flea market.’) This pretty square is the heart of the market, although not everything offered for sale is a bargain or an antique.

On Sundays, there’s a festive air with live music from street bands. The area south of the square morphs into an ersatz open-air bazaar that extends to Thissio, where collectors browse for old phone cards, trinkets, and tools. On Saturday nights, in typically Athenian fashion, junk sellers setting up stalls mingle with the style-conscious bar and restaurant patrons setting out for a night on the town.

Nothing in the demure façade of this two-storey, neoclassical building in Psirri hints at its odd history—or what it hides inside. Officially it houses the library of the Athens Archdiocese: a 15,000-volume collection. But a discreetly lit dome at the far end of the library’s main corridor reveals the inside of the medieval church of Agia Eleousa. Look down to see what remains of the church, which once belonged to the British consul and father of Lord Byron’s famed ‘Maid of Athens’. Severely damaged in Greece’s War of Independence, the church was seconded by the new state to house the misdemeanors court, which was designed by the Danish architect Christian Hansen. As for Agia Eleousa, its name—Merciful—may have been inspired by the ancient Altar of Pity over which it was built.

Inside the medieval church of Agia Eleousa at the Archdiocese library.

Platia Iroon has kept the flavour of old Athens.

Laid in 1850, Platia Iroon, or Heroes’ Square, has the slightly unreal feel of a movie set with its part-pedestrianised lanes and marble fountain, low buildings with old-style metal canopies, and a 1930s modernist building constructed at an obtuse angle that follows the shape of the square. The traditional coffee houses and taverns once favoured by a rough-and-tumble mix of patrons—ranging from monarchs and writers to workmen, Asia Minor refugees, and small-time gangs—have now been replaced by hipster bars, student cafés, and craft shops packed along the five narrow streets radiating from the square. Yet despite its trendiness, Platia Iroon and Psirri somehow retain the flavour of old Athens missing from the more touristy Plaka.

In the early 20th century, Psirri was a neighbourhood with a strong Jewish presence. The two synagogues around the corner from the official Holocaust Memorial—a minimalist sculpture of a compass-like Star of David on Evovoulou Street—attest to this. Concluding efforts that had begun in 1840, a site for a synagogue in Athens was finally purchased in 1903. But differences between Sephardic and Romaniote Jews led to the establishment of a second synagogue a few doors down. Both synagogues still survive on Melidoni Street, though they are rarely open to the general public. The oldest, Romaniote synagogue at No. 8, is known as the Ioanniotiki, reflecting the community’s roots in the northern Greek city of Ioannina. The newer one, a marble-clad 1930s structure renovated in 1970, stands at No. 5.

Ermou Street, which runs from Syntagma Square right through the city centre, ends rather ingloriously at a narrow square occupied by the late-11th-century church of Agion Asomaton, another name in the Orthodox faith for the archangels. The area’s revival was spurred by the Benaki’s Museum of Islamic Art a few blocks away, at Agion Asomaton’s intersection with Dipilou. The decision to locate this collection here wasn’t by chance: inside the church you’ll notice Islamic motifs that signal the presence of an Arab merchant community in the area during the 10th and 11th centuries. Arabic influences are also evident in the clay reliefs over the windows. 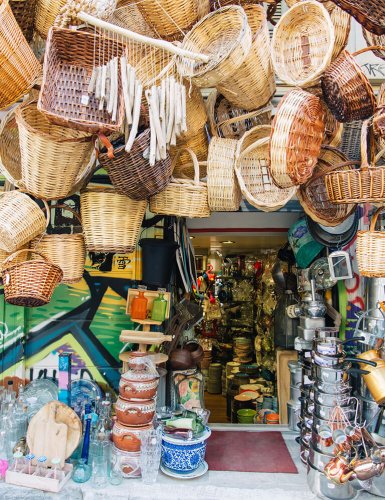 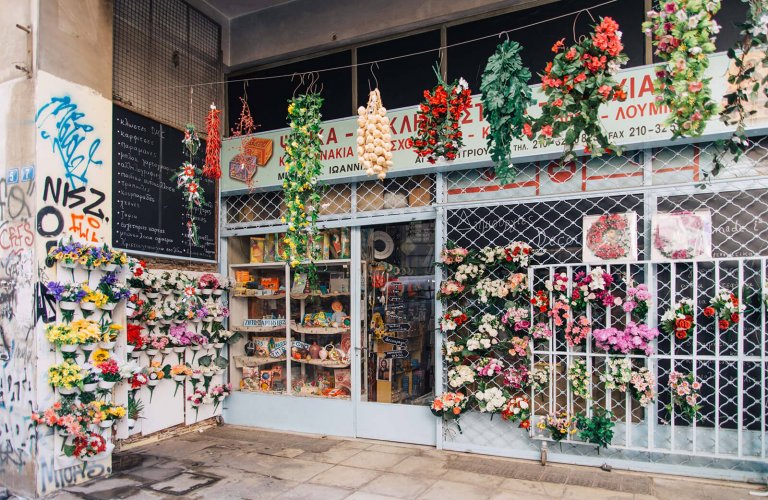 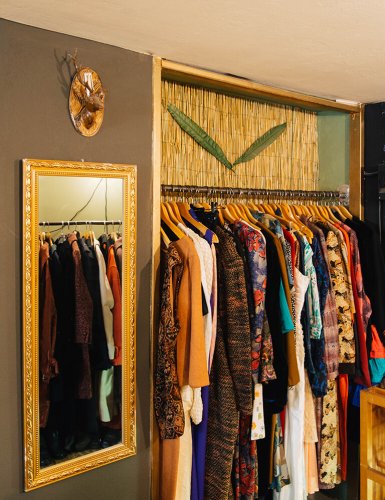 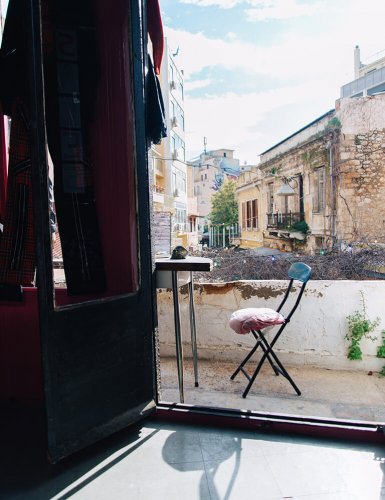 Some of the area's stunning street art.

A look inside one of the many affordable shops around Monastiraki and Psirri.

Seating in a sliver of sunlight in Psirri.

Shopping for Vintage Fashion in Athens