Kolonaki may be the city’s poshest neighbourhood, but there’s delicious irony in the fact that under Ottoman rule it was largely grazing lands. Many of its earliest inhabitants chose to settle at the foot of Lycabettus hill because it reminded them of their mountain village. Kolonaki’s star may have waned in recent years, but it’s still the place moneyed Athenians go to shop and socialise. And just as the city’s centre of gravity has shifted so has Kolonaki’s, moving from Agios Dionysios to Kolonaki Square, with the cafés on its lower side and along Kapsali street siphoning off its cachet. But Kolonaki never goes out of style—and is in fact reclaiming its own. The high street retailers that sprouted like weeds in the 1990s have beat a retreat, leaving space for a new crop of Greek designers to move in.

In this neighbourhood, where you go for coffee is as important as with whom.

The Capital of Café Culture

For local residents, Kolonaki is simply their neighbourhood. But for the rest of Athens, nay Greece, it is the capital of the city’s café culture and symbol of the booming 1980s. The mood is perfectly captured by a comedian’s catchphrase, Pame platia?, or “Shall we go to the square?”—meaning, very specifically, Kolonaki. But in this see-and-be-seen quarter, where you go for coffee is as important as with whom. The fashion-minded crowd populates the cafés furthest from the square, on Milioni and Kapsali. Political movers-and-shakers down a quick espresso on the upper side, near Tsakalof, but settle in for longer meetings on the platia’s lower end. Brokering a business deal? You’re more likely to stake a seat on the block between Kanari and Koumbari. As for the city’s literati, their haunts are away from the platia itself at the cafés along Skoufa, near Agios Dionysios church.

Rising to nearly 300 metres, Lycabettus Hill (Lykavittos to the locals) towers over Athens. Geology assigns it to the Tourkovounia ridge, but mythology explains it as a rock Athena was carrying to fortify the Acropolis, but dropped when she was startled by a cow. The old quarry, which has been converted to an open-air theatre (now temporarily closed for restoration), seems to confirm this account. Starting your visit from Lycabettus will help you get your bearings, as the summit offers a panoramic view of Athens that on a clear day stretches to the island of Aegina. Agios Georgios, the medieval white-washed church at the top, is as small up close as it looks from afar and was originally a monk’s refuge. The short cable-car ride is the quickest way up, but walk down for different views of the city through the pines. Plan a stop at Ayii Isidori, the hill’s second church. It conceals the entrance to a tunnel that Greeks fighters used to escape the city during the independence revolt.

The view from Lycabettus Hill.

This square is built on top of a reservoir.

Dexameni means reservoir and that is exactly what this square is built on. Hadrian constructed the first water supply system, which was fed by a metre-wide aqueduct cut into Lycabettus Hill. In the mid-1800s, the reservoir was restored and in the interwar period was briefly converted into a children’s swimming pool, but today it's only used once a year for a religious observance. Shaded by droopy elms, the tranquil plaza is what rates as counter-culture in Kolonaki—a refuge for those more cerebral than Cerruti. This reputation has its roots in the 1930s when it was the haunt of the city’s intellectuals, writers like Kazantzakis, Sikelianos, Papadiamantis, and Varnalis. The ouzeri where they met has survived various incarnations. Today you can enjoy an ouzo-meze, if not at the same table, on the same spot. 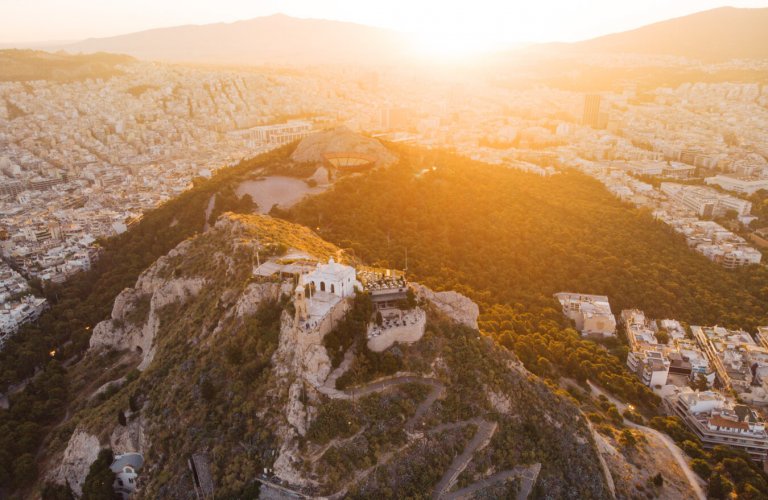 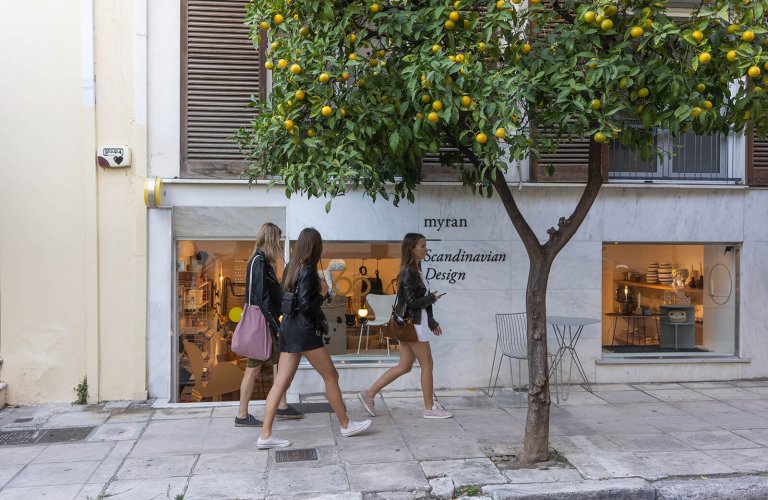 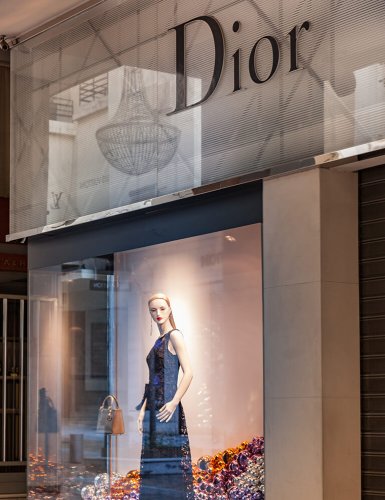 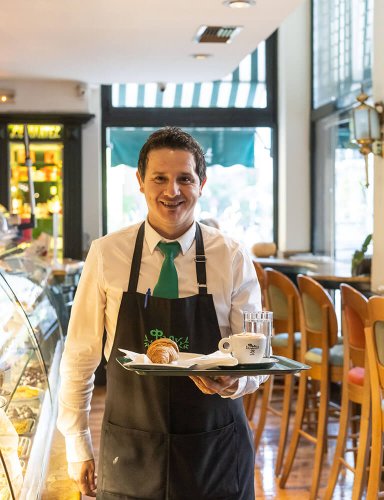 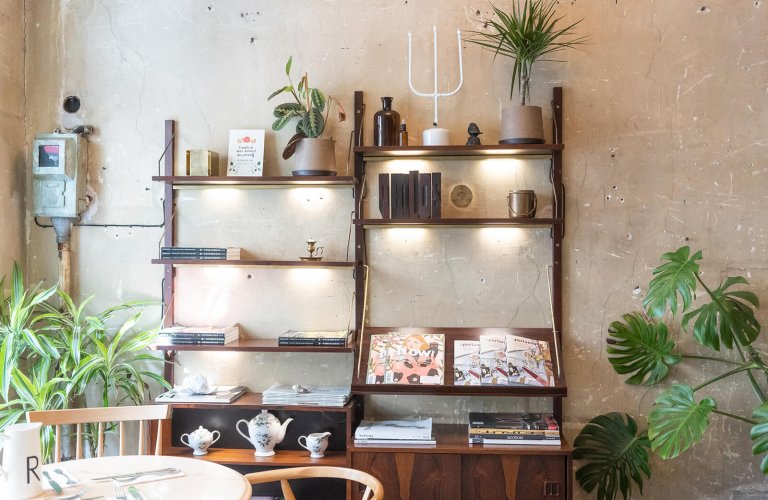 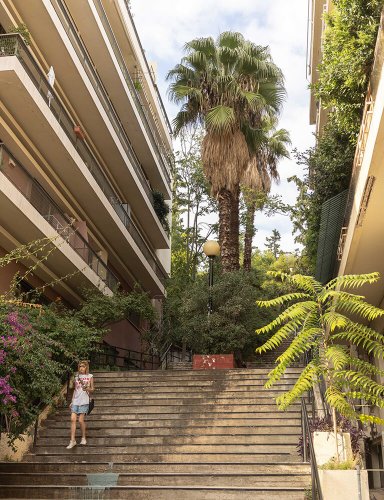 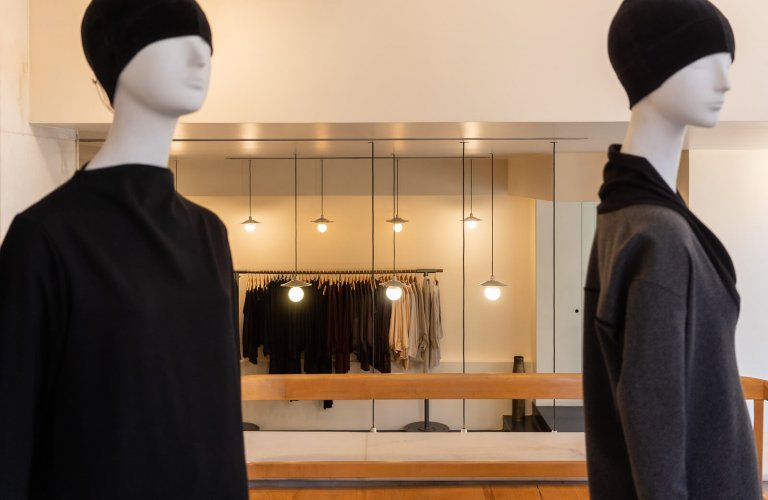 An aerial view of Lycabettus Hill.

Stylish shoppers checking out the stores in Kolonaki.

Things can get very high-end in this neighbourhood.

Coffee, croissants and a smile in a Kolonaki café.

Step up your walking game in Kolonaki.

Everything in this neighbourhood is fashion-forward. Even the mannequins.

“Folk fashion doesn’t just reflect personal status: history is sewn into it too.”

Museum of the History of the Greek Costume

A draped white silk chiton might be the first image that comes to mind when you think of traditional Greek dress, but folk costume is far fancier and more varied. What Greeks wore has, since antiquity, communicated important social information such as someone’s village and marital status. These clues are literally stitched into the headdresses, bodices, skirts, and shoes of the Museum of the History of Greek Costume. Even the fabrics, layering, and embroidery are part of this subtle code, which the signage helps you to decipher. Folk fashion doesn’t just reflect personal status: history is sewn into it too. Cycladic costume shows a definite influence from the East, whereas 18th-century dress in the north had a Slavic air. As for the representative dress, the Amalia is named after Greece’s first queen, who adapted a Peloponnesian folk costume to suit the continental European taste for a snug bodice over a full skirt.

Businessman turned diplomat John Gennadius inherited two passions from his father: a love of books and a love of Greece. These fused in a collection of some 26,000 books which he then donated to the American School of Classical Studies. The library and its strolling grounds are as impressive as the collection. Entering, your eye will be drawn to the columns and the Isocrates inscription over the door that reads ‘They are called Greeks who share in our culture’, but tilt your head back to take in details like the delicate inlay on the ceiling. Indoors, there’s plenty to see, even when the library isn’t hosting an exhibition. The reading room by itself induces a hushed awe; watercolours by Edward Lear and Lord Byron memorabilia are a bonus.

Inside, this library holds 26,000 books, and outside it's simply stunning to see.