It is a truth universally acknowledged, that every man (or woman) in possession of a good fortune, must be in want of sugar and deep-fried dough. There is something about this heady combination that appears to be globally irresistible. The Greek proof for this is loukoumades, little deep fried doughnuts doused in syrup or honey and sprinkled in cinnamon or sugar that taste as good as they sound.

Unlike their sister-desserts around the world, however—beignets in France, churros in Spain and jalebi in India, and (dare I say it?) doughnuts—loukoumades hail back to Greek antiquity. First mentioned by different names by either Callimachus of Cirene, or even better Archestratus of Sicily, whose humorous poems advised ancient readers on where to find the best food in the Mediterranean, the dessert evolved in different variations through the Byzantine and Ottoman empires. It came to be named lokma in Arabic and Turkish, and loukuma or loukoumades in Greek.

Traditionally, loukoumades are a celebratory treat. Mainly eaten at weddings, panigiria (traditional church festivals celebrating Orthodox saints) and on special occasions, they are usually served as a portion of anything from 4 to 6 pieces of deep-fried dough, then doused in honey and sprinkled in cinnamon. Best eaten straight away when they are piping hot.

Krinos, flying the flag for tradition

Krinos (the Greek word for lily), located on Aiolou Street, has remained the same since 1923, when it first opened as a traditional coffee shop selling loukumades. Everything from the retro mosaic floors to the marble top tables and the self-service hailing back to the 80s (you have to get a school cafeteria tray to get served), as well as a menu that ranges from bougatsa (a Greek custard pie traditionally eaten for breakfast) to soft serve ice-cream, is part of the charm. Loukoumades here are soft and chewy, with a hole in the middle (doughnuts anyone?) and usually served with honey, cinnamon and crushed walnuts on top. The taste is fantastic, rich, juicy and chewy at the same time.

This humble, third-generation family place right off Omonia Square, on busy Sokratous Street, is run by the ever-smiling Thodoris Ktistakis. It only serves one thing: loukoumades. Thodoris’ grandad first learnt the art of loukoumades in Alexandria in Egypt and then brought the recipe with him to Crete. The dough balls (cut by hand with a wooden spoon and left to mature in a wooden trough upstairs) are deep fried and then submerged in sugar syrup, with a sprinkling of cinnamon and sesame seeds. The outside becomes crunchy, while the inside remains soft, an effect which many loyal customers (i.e. me) have dubbed ‘the syrup explosion.’ Surprisingly, this is a very light version for a dessert that is usually quite heavy.

Loukoumades is the only thing on the menu here, so you know they've got to be good.

The past ten years have seen a re-invention of loukoumades. This might be due to their everlasting popularity with large Greek communities abroad, especially in Australia, where they have become a hipster sensation, branded as “handcrafted Greek doughnuts” and sold from pop-up shops and food trucks with elaborate toppings such as salted caramel, citrus blueberry cheesecake and spiced figs. This re-invention has also taken place in Athens. Nowhere is this more obvious than the aptly named Lukumades on Aiolou Street, offering a vast array of flavours in a totally modern setting right next to hipster-central Agias Eirinis Square. This is an extremely popular spot and there is a novelty factor involved: loukoumades are offered with both fillings and toppings, ranging from mastic to lemon and chocolate. There are also savoury and spicy versions filled with different Greek cheeses such as Cretan mizithra (a fresh, light goat’s cheese) or feta and Florina peppers, drizzled with honey and sesame seeds or molasses and pine nuts. 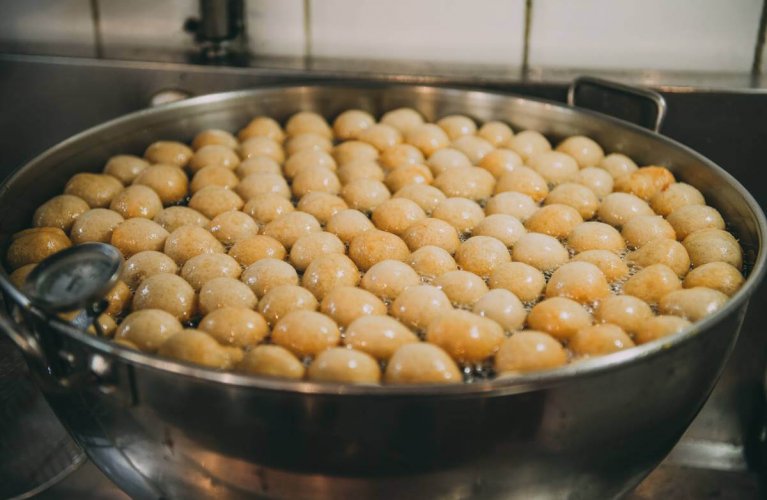 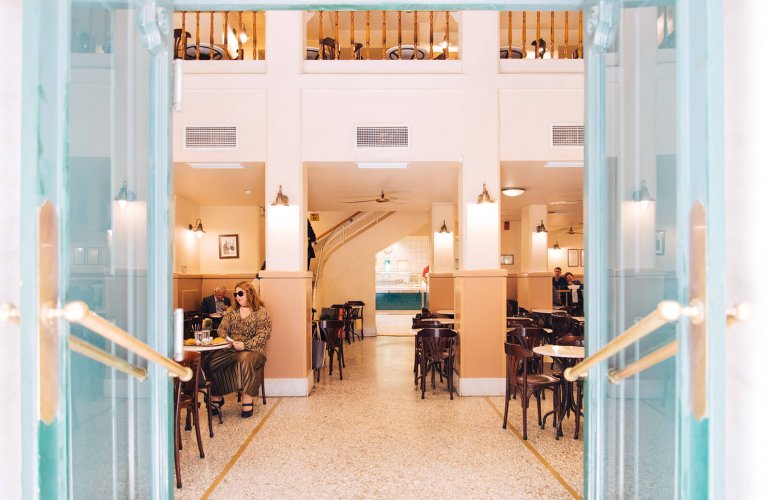 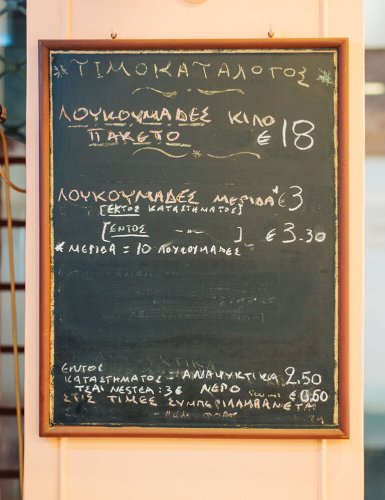 Frying up some loukoumades.

Grab a seat and grab some doughnuts.

The menu at Ktistakis.