Less touristically inclined than Monastiraki, the Thissio and Petralona districts are where the locals go to people-watch and eat out. On weekends, staking a table at the cafés along Iraklidon Street in Thissio can be a Herculean task—fitting for a street named after the hero’s descendants. But it’s not for a lack of seating: patrons here and on adjacent Akamantos Street like to linger over their drinks and meze as they deconstruct the latest film, book, or political development.

Both modest neighbourhoods with working class roots, Thissio and Petralona gentrified in the early 1990s, attracting students and young professionals with their prime location, elegant townhouses and handsome period apartments. This gradual influx helped preserve the sense of community. Locals socialise at the many neighbourhood tavernas, running the gamut from cheap to post-modern, and cocktail bars offering variously angled views of the Acropolis. Exploring these adjacent neighbourhoods yields delightful rewards: old tram tracks, oddball architectural gems, and the newly-discovered section of an ancient road linking Athens to Piraeus. 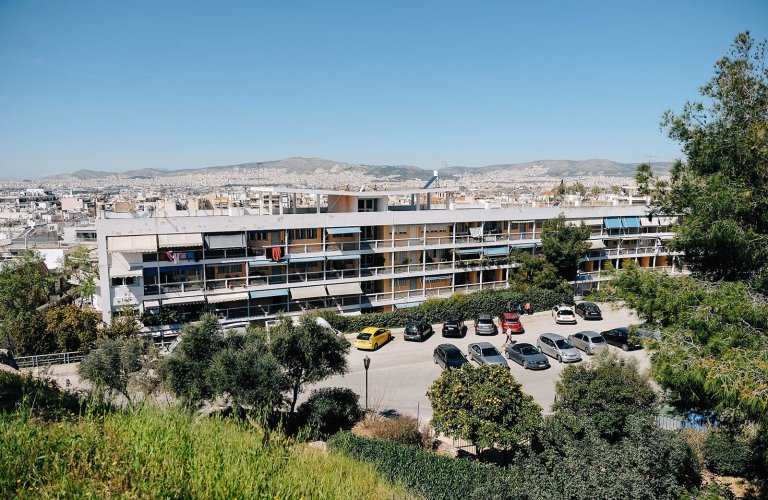 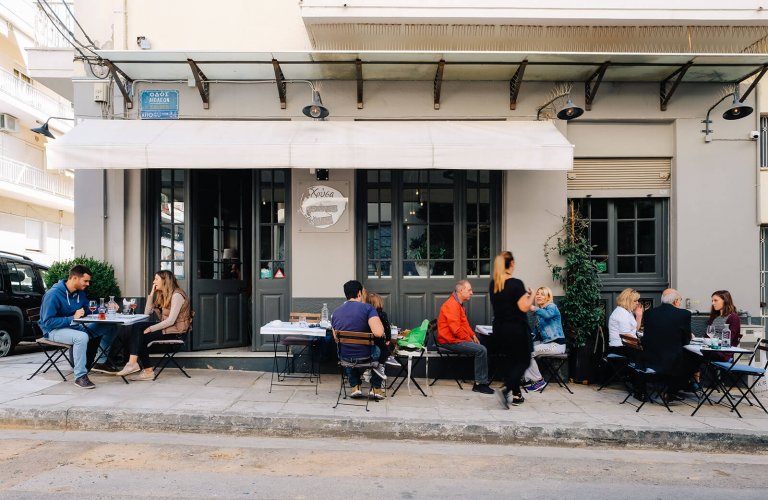 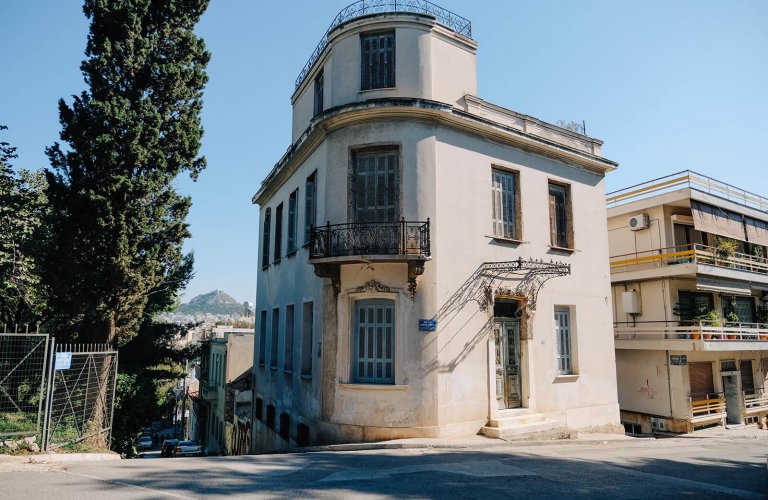 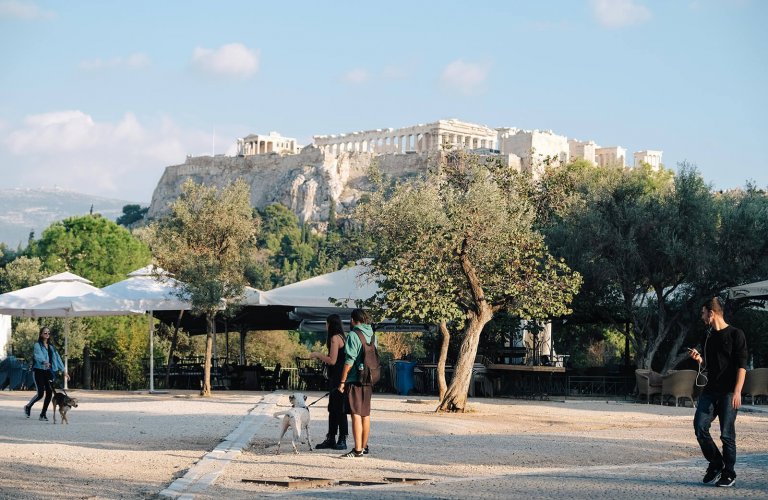 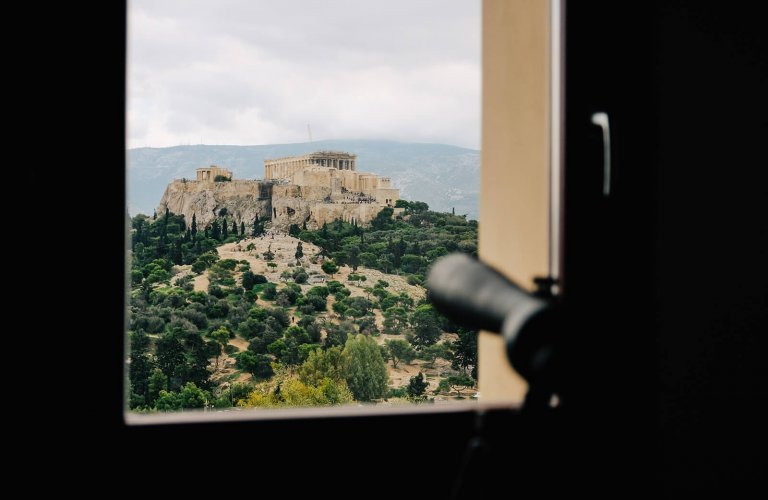 Thissio and Petralona are full of lively neighbourhood tavernas.

One of the area's many beautiful townhouses.

These neighbourhoods have no shortage of breathtaking Acropolis views.

We mean it—there are so many ways to check out the Acropolis in this area.

A view from outside the Melina Mercouri Cultural Centre.

It’s the next best thing to a time machine: an exhibition recreating old storefronts and streets in Athens from the early 20th century to the interwar years. 'A Stroll through Old Athens' is small but definitely worth the visit for the building alone: the former Pil-Poul hat factory. Founded in 1886, the Pilopio Poulopoulos factory not only supplied the hats of well-dressed Athenians, but also employed hundreds of workers and exported its wares to Egypt, Bulgaria, and beyond. The 1,500-square metre building today houses the Melina Mercouri Cultural Centre, which hosts cultural events and the Haridimos Shadow-Puppet Theatre, dedicated to the traditional karagiozis puppet shows—ostensibly for kids, but laden with metaphors about Ottoman rule.

“A summer treat that has become tradition: film screenings in the gorgeous walled garden.”

Since it was pedestrianised, the lower half of Ermou Street has emerged as a showcase for street culture—music, dance, graffiti art. This pale neoclassical mansion might seem at odds with the cutting-edge vibe, yet is very much a part of it. The headquarters of the Greek archaeologists’ association, it’s one of the city’s least-known cultural venues. Conferences, workshops, and lectures about archaeology connect with pop and contemporary culture through a range of occasional activities, from crafts shows to Greek folk dance classes. A summer treat that has become tradition: film screenings in the gorgeous walled garden that follows the building’s curved contours.

Evening visitors to the National Observatory are rewarded with a peek at the Athenian sky through the 40-centimetre lens of a 1902 telescope (by appointment). But even in full daylight there’s plenty to draw your gaze at the National Observatory, from the building’s stunning architecture and collection of scientific instruments to a full-on view of the Acropolis. Anyone who values punctuality will especially appreciate the ‘Time Room’ where a 19th-century Viennese telescope that was used to set official Greek time until 1964 is kept. Like the building itself, this instrument was donated by Georgios Sinas, a wealthy Greek expatriate who funded the construction of several monumental buildings in the city. Strolling the Observatory grounds affords wonderful views of Athens. The ancient Greeks’ association with the site wasn’t nearly as romantic: being tossed off the western slope was punishment for a range of crimes.

The National Observatory from afar.

Follow this Promenade from Philopappos Hill to Agion Asomaton Square.

Strolling the Apostolou Pavlou pedestrian way is one of the simple joys of life in Athens. The modern capital’s architects, Eduard Schaubert and Stamatis Kleanthes, designed this ‘grand promenade’, which runs from the foot of Philopappos Hill to Agion Asomaton Square. It’s a marriage of ancient city and contemporary metropolis. Street artists, skateboarders, campaigners touting a cornucopia of causes, artisans and sightseers make up the colourful crowd, harking back through the centuries to the orators and merchants who once milled around the Pnyx and Agora. A modern landmark worth noting: the open-air Cine Thissio at No. 7, which has operated since 1938.

This open-air theatre perfectly captures Petralona’s village ambience. It has been at the centre of local community life since the early 1930s when it staged revues and shadow puppet shows. Like the surrounding neighbourhood, this arthouse cinema has evolved slowly: from an impoverished, marginalised district that settled Greek refugees fleeing Asia Minor, Petralona has blossomed into a charming pocket of stone cottages with walled gardens and mid-20th century dwellings, where residents still sit on the stoop exchanging gossip as they watch the comings-and-goings at the area’s tavernas.

A Local’s Guide to Petralona