Ambelokipi means ‘vineyards’. But it’s hard to believe this downtown district was once a leafy village. Today five of the city’s main avenues cross Ambelokipi. No street more vividly illustrates how modern Athens evolved than Vasilissis Sofias Avenue—an architectural chronology of Athens. The neoclassical style gives way to the 1950s avant-garde, epitomised in the Hilton hotel. With its geometric forms, the US embassy, designed by Walter Gropius, sets the tone for later experimentation, like the Athens Concert Hall. This break with tradition reflected wider social changes, as Athenians moved away from their families' scrutiny into new neighbourhoods like Ambelokipi in the 1960s and ‘70s. Affordable, modern housing attracted non-Greeks to the area too, enhancing the casually cosmopolitan air. With a high concentration of cinemas, cinephiles still head to Ambelokipi for first-run films.

Ambelokipi has a lot of cinemas, making it the perfect neighbourhood for movie lovers.

When it opened in 1991, the Athens Concert Hall drew the awe of even well-heeled and well-travelled Athenians with its elegant façade mixing ancient austerity and contemporary minimalism and its wood-panelled concert halls. Performing at a venue that boasted Sir Neville Marriner as the director of its resident orchestra conveyed the highest prestige. Today it has settled comfortably into the city’s cultural fabric, opening its impressive music library to the public and organising concerts on its well-tended grounds. It’s often used as a conference centre and occasionally hosts exhibitions. Cap a stroll with a drink at the café-bistro in the gardens.

Many of Mavli Square's bars and late-night eateries are legendary in Athens nightlife.

If Kolonaki is the heart of the city’s café culture, then Platia Mavili (Mavili Square) is the hub of the after-hours bar scene. Named after a minor Greek poet and originally designed as a traffic island, this triangular square has become an unofficial meeting point for barflies. The draw: a perimeter lined with small bars, with tables in the square and a steady clientele almost 24 hours a day. Many of these watering holes have ‘legendary’ status in the annals of Athens nightlife. The all-night food truck that serviced the clientele did so well it is now a fully fledged hole-in-the-wall selling vromiko (literally ‘dirty’) hot dogs and sandwiches until 7 am. The city’s ‘in’ spots may shift, but starting or ending the night at Mavili never goes out of style.

Not so long ago, when Panathinaikos was playing at home, the swathe of Athens around ‘i Leoforos’ (the Avenue) would be awash in more green than a Saint Patrick’s parade. Every goal literally reverberated through the neighbourhood, as fans exploded in window-rattling roars. These days, Panathinaikos plays at the Spyros Louis Olympic Stadium in Maroussi. Built in the early 1920s, the Apostolos Nikolaidis Stadium (its official name) is such a strong symbol for diehard Panathinaikos fans that attempts to relocate to a more permanent modern home field have repeatedly faltered. Although today the team has fans worldwide, it’s so deeply rooted in downtown Athens that support for Panathinaikos is one criterion of a true city denizen.

“Every goal literally reverberated through the neighbourhood, as fans exploded in window-rattling roars.”

This Bauhaus-style building stands as a monument to the city's history.

If you look closely at the crumbling yellow housing estate on Alexandras Avenue, you’ll notice a spray of bullet holes in the pocked facades. These date from 1944, when Ampelokipi was the site of one of the fiercest battles in the Greek civil war (1946-1949). A marble plaque installed by the Greek Communist Party honours its members’ heroism. The compound had been built a decade earlier to house Greek refugees from Asia Minor. The 228 apartments, grouped in eight buildings, are an outstanding example of architecture in the Bauhaus style. Despite their extremely dilapidated state, many apartments are occupied and about one-quarter are privately owned. An ambitious restoration plan that includes a museum is in the works, but until then the ‘Prosfygika’ (Refugee Homes)  stand, somewhat incongruously, as a monument to the city’s history.

Call it the Athens paradox, but the best places to escape the city are often right in its midst. Eleftherias Park sits on one of the busiest thoroughfares in Athens, yet the traffic noise fades with every step up the low, grassy knoll. Cool and shaded around the edges, the park is a popular picnic area, with unobstructed views towards Mount Ymittos. A massive bronze statue of statesman Eleftherios Venizelos marks the barracks of the Balkan Wars infantry, which today house a cluster of small cultural spaces: the Eleftherios Venizelos Museum, a gallery for art exhibits, and a museum dedicated to those who fought the 1967-1974 dictatorship. Two stone-built cottages that served as Greece’s first military hospital are being renovated as a library.

It's smack in the middle of lots of traffic, but we still like to go to this park to relax. 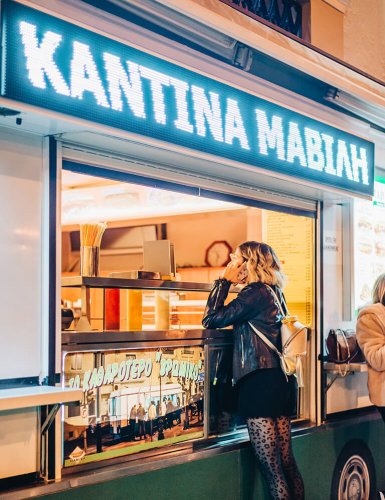 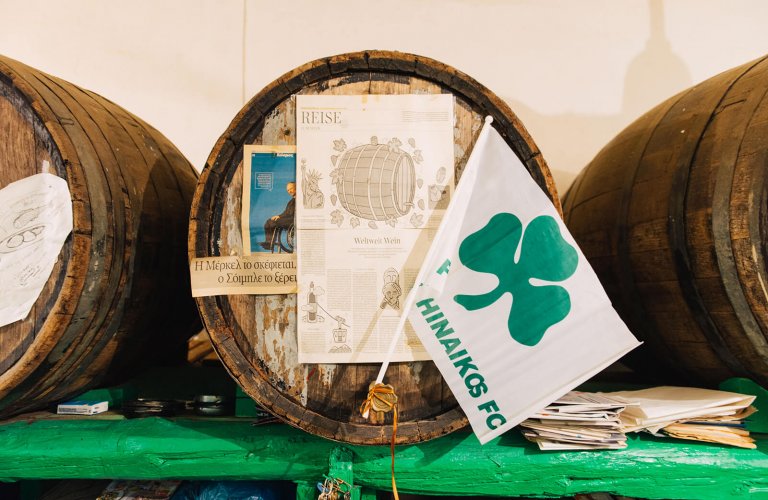 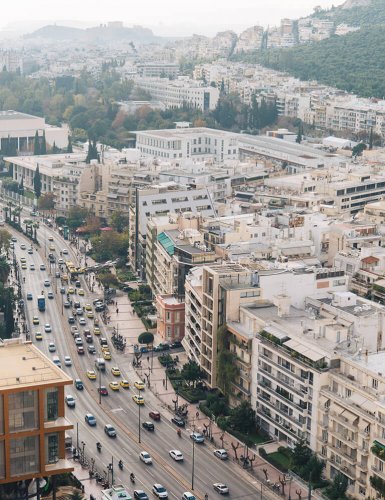 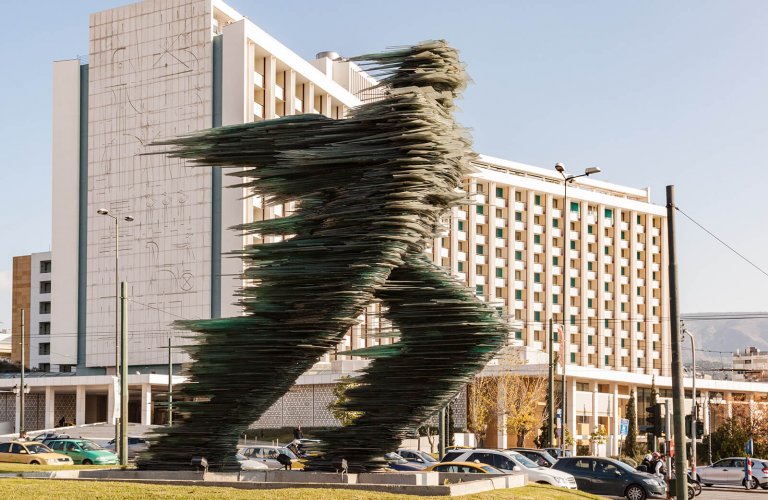 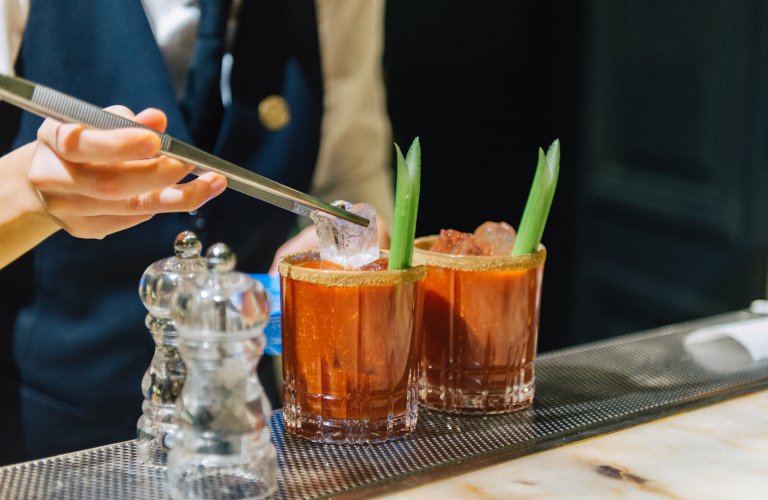 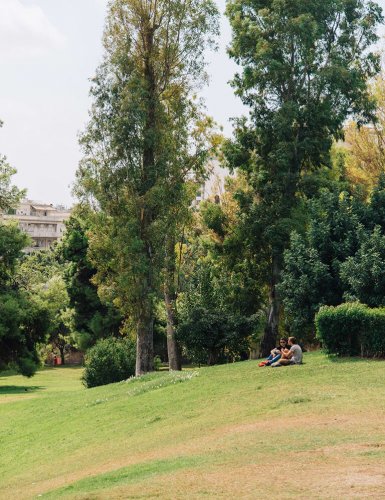 This cantina is a must for barflies and party-goers at the end of their night.

Five of the city’s main avenues cross Ambelokipi, but we love it despite the traffic.

The towering sculpture of Dromeas, the running man, outside of the Hilton Hotel.

A bartender drops an ice cube into a cocktail at Kyrios.

A quiet moment in Eleftherias Park.

A Local’s Guide to Ambelokipi