The Perfect Weekend on Kea

Think Cyclades and you might imagine long ferry rides and think you’d need at least a week to make it worth the trip. So not the case. There’s one Cycladic island only an hour from Athens. And it’s as lovely as the rest.

Kea (or Tzia, as it’s known among locals) is a 60-minute boat ride from Lavrio, a low-key port not far from Athens airport, and less than an hour by coach or car from the city centre.

While fairly fashionable and upscale, Kea is quietly so. Its proximity to the capital has drawn many affluent Athenians to build summer houses that are mostly discreetly camouflaged in the hills. The only evidence of the presence of the high and mighty are the yachts and sailboats you’ll spot while leaning out of your car window to catch a glimpse of a secluded beach, or in the quaint little harbour of Vourkari.

Kalydonyhi beach is one of the many swimming spots in Kea accessible only by boat.

Hike along Kea's paths and discover a secluded paradise.

Many of Kea’s roads are unpaved, but that’s part of its magic. You’ll need a car to explore the wilder, eastern side of the island where dirt roads reign. Kea’s coastline has over 30 beaches, but most are only accessible by boat. But there’s a reliable bus service that will get you from Korissia, the port, to Ioulida, the Hora or capital, and several pretty bays including Otzias, Vourkari, and Koundouros.
Kea may not be the island of endless history and sightseeing … but you didn’t really leave Athens for that, did you?

Friday: Take it easy, take it in

The first thing you’ll want to do is dive into the sea. There’s no reason to schlep to the island’s far corners straight off the boat, when there are a couple of great beaches nearby. Start with the small but happening Gialiskari. Right on the road before the little village with the same name, its waters are an enticing blue-green, and there’s a wooden-decked beach bar for refreshments.

A beach bar and blue-green waters are a bonus at this easy to reach beach.

Otzias is great for family days at the beach.

For something grander, continue on the road to Otzias, the longest organised beach in Kea. It’s also incredibly child-friendly, with a small playground, plenty of sunbeds, and shallow waters.
The Greeks love to say that swimming in the sea builds up your appetite. If you’re feeling peckish, Otzias Kouzina is a beachfront taverna that serves up traditional Greek dishes, including fried calamari and salads grown in the owner’s back yard. Do ask about the daily specials, and if the waiter says “briam” (roasted vegetables in olive oil), order two.

Kea’s sunsets rival those of Santorini, but here you don’t have to fight selfie sticks and coach parties for a front-row seat. If you’ve rented a car and are still in Otzias, look towards the sea to your left. See the little mountain? Drive over it and find a spot where it’s just you, the cliff and the sea. Alternatively, head to Vourkari and watch the show with the beautiful people. It’s the island’s picturesque marina and only nightlife hotspot, where the jet set park for the night, swarming its cafes, restaurants and bars.

Vourkari's seaside tables are the perfect spots for sunset watching.

Kea’s capital, Ioulida, trickles down the mountainside like a glass of spilt milk. Visit the compact archaeological museum and then get lost in the whitewashed sokakia (lanes) keeping an eye out, or up, for touches by Greek artist Alekos Fassianos, who owns a home in Ioulida, as you are walking through the arched entrance into the town.

Be sure to trek through the village and onto its outskirts to pay homage to the island’s mascot: Leon, the lion of Kea. Carved into the rocks, smiling at the town below it, this stone feline dates back to 600 BC. Mythology has it that the lion was dispatched to destroy Kea by the gods of Mount Olympus, who were jealous of the water nymphs who lived there. Evidently, this curiously friendly cat did not succeed. The lion even has the only bar in Ioulida named after him.

The ancient lion lies just a short walk out of Ioulida. Just follow the signs.

Find a shady spot under the massive trees at Ton Kalofagadon in Hora’s main square. This taverna is known for its Kean specialties. Try the loza, (the proscuitto of Kea) or paspalas (pork roasted with tomatoes, eggs and cheese). The piglet roasting on a spit is evidence that they know their meat on a stick, too.

Ready to hit the dirt road? Head to Xyla for a sunset swim. This beach is a favourite of low-maintenance locals because it’s usually quiet. The best time to swim is in the afternoon when everyone’s headed off to late lunch. There’s sunbed service for those who stay behind.

Xyla beach is worth every bump in the dirt road that you take to get there.

There’s no better place for dinner on Kea than barefoot on the beach at Strofi tou Mimi in Vourkari. Some say this place makes the best French fries in Greece, and we’re not going to argue. Order the saganaki (fried cheese) while you’re waiting for the cook to grill your fresh fish. If you’re craving a little action after dinner, you’re in the right place. Just follow the sailboats docked in the marina, until you reach Vinilio. Anyone who’s anyone on Kea will be there.

Sunday: Ruins on a Beach

Start the day the Greek way. Choose from the many versions of tyropita (cheese pie) at Korissia bakery opposite the ferry dock. For some take-home tastes of Kea, stock up on amygdalota (flourless cookies made with local almonds), a jar of thyme honey, or some acorn cookies from Red Tractor Farm nearby.

Walk down to the ruins of Karthea, it's worth the sweat.

On the eastern side of the island are the remains of Karthea, one of the four ancient cities of Kea. Built in the 12th century BC on a slope right above a magical beach, it’s a steep 45-minute hike each way to the unspoiled coastline below. But it’s worth every step.

If extreme hikes aren’t your thing, Kea has 81 kilometres of (mostly gentle) walking trails, part of an ancient network that connected the city-states. Try the Ioulida-Otzias route: a little over five kilometres, it takes you past the Leon of Kea, with a refreshing finish line at the organised beach of Otzias.

Otherwise, you could spend the day snorkelling or scuba diving at Koundouraki beach. The reef is one of the top diving attractions in Greece. The seabed right before the island’s port is where Titanic’s sister ship, the Britannic, sunk in 1911. Though its accessible only to professional divers, it’s fun to think of what lies in the deep as your ferry cruises into Korissia port.

If that all sounds like too much hard work, you can always just grab a cocktail and a sunbed next to the island’s jet-setters at Koundouros beach and pretend you’re on Mykonos.

Your last meal should be a treat. Aristos, one of the many excellent seafood restaurants in Vourkari, takes special pride in its lobster spaghetti, but his fish soup is a showstopper, too. Plus there’s the fun of watching the suave yachting crowd drop anchor and jump off board to join you at this popular eatery. For the sweet of tooth, posh ice cream joint, Kayak, is nearby. The frozen Greek yoghurt is divine. 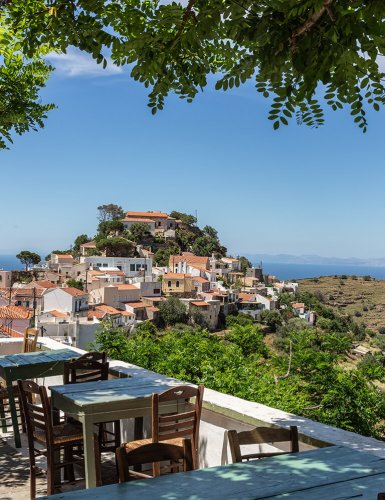 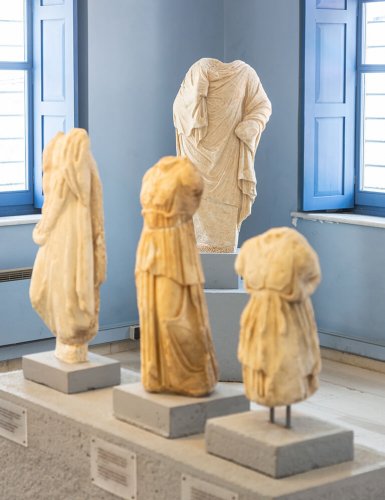 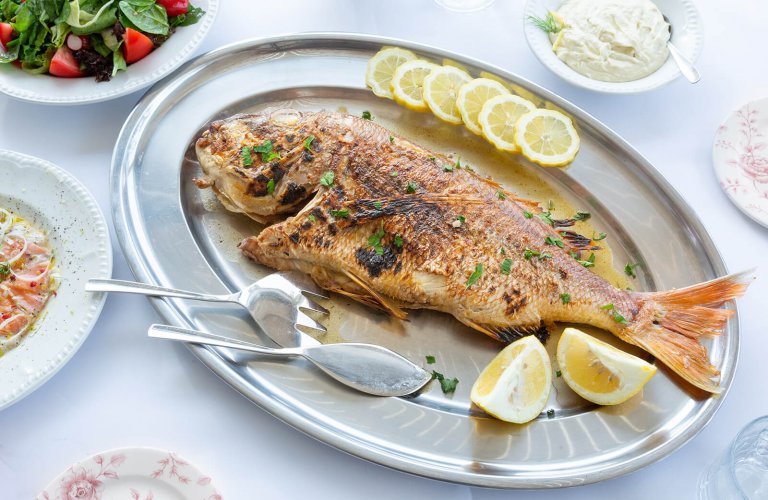 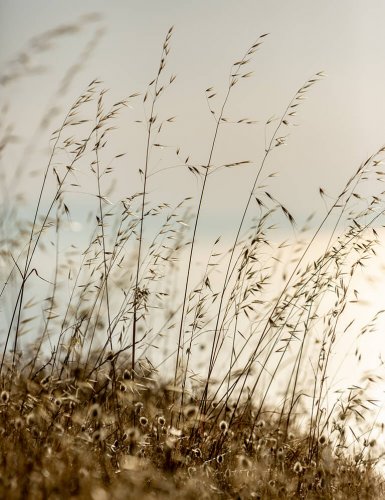 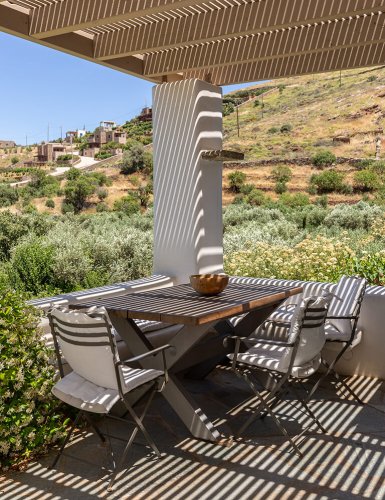 Who wouldn't want to grab some lunch here?

The archaeological museum in Ioulida may be tiny, but its contents wealthy.

Dry and sunny is beautiful; a characteristic typical of the Cycladic islands.

Visit the Red Tractor Farm if only to get a bag of their acorn cookies.

Ferry boats leave daily from the port of Lavrio. There are usually three ferries a day, with additional routes in July and August. You can purchase tickets at the port, but if you are travelling with a car during high season, we strongly suggest you buy them in advance here.

Bringing a car on the ferry from Athens is your best bet. You can rent vehicles at Korissia port, but there are often long queues during the summer. The island has a reliable bus service, but it will only take you to places connected by asphalt roads. Check the bus schedule at the port.

The Perfect Weekend on Aegina