The Sugar File: Everything You Need to Know about Greek Desserts

Click here to stay updated on the latest COVID-19 measures regarding eat & drink and entertainment spaces.

Syrup, honey, nuts and spice, that’s what Greek desserts are made of. From baklava to kataifi, here are the stories behind the traditional sweets and where to go get your hands sticky in Athens.

Pieces of heaven at Feyrouz.

In Greece, baklava  comes in many regional guises, with different names such as samousades, zournadakia, and masourakia. Generally speaking, in southern Greece baklava is mostly made with chopped almonds and in the north with walnuts; although some recipes use hazelnuts, sesame or even raisins. Pistachio baklava is more of a Turkish, Middle Eastern and north African tradition, but it can be easily found in Athens if you know where to go. For the Greek take on baklava, head straight to Afoi Asimakopouloi in Exarchia, made with their own home-made butter. For a taste of samousades (baklava rolls with chopped almonds) pay a visit to Pnyka bakery. For the rarer baklavou from Lesvos island, cut into cubes and individually wrapped in paper, pay a visit to Mitropolitikon, a retro shrine to sugar in the Historic Centre.

In the southern suburbs, you’ll find plenty of family-run pastry shops that specialise in politika glyka, syrupy sweets which arrived in Greece along with refugees from Istanbul and Asia Minor from the 1920s onwards. Palet is one of the few places where you’ll find a Turkish specialty called baklava sultan, in which the pastry is almost raw, brushed with freshly churned butter and stuffed with finely chopped pistachios. Maxim does two kinds of baklava, one with walnuts and one with pistachios. At Belle Vue, my favourite is baklava kuru, a drier, flakier version in which many thin layers of pastry are stuffed with pistachio nuts from Aegina. Over in Glyfada, Papaparaskevas makes the perfect saragli (baklava rolls). Chatzis, near Syntagma Square, does a refreshing version of baklava filled with whipped cream. And at Feyrouz, pistachios are layered with buckwheat filo; they also do a fantastic vegan baklava with coconut milk.

This variation of baklava is wrapped in a crispy nest of kataifi pastry, which looks like vermicelli. This tangle of thin strands of pastry is filled with chopped walnuts, almonds or pistachios, brushed with melted butter, baked and then doused in syrup. Kataifi can be sold by the piece or as a whole round cake. Rose or orange blossom water is often added to the syrup, which gives it a delicate fragrance. You can taste some of the best kataifi in Athens at Divan and Sarayli in Palio Faliro, Patsis in Peristeri, and Stani in Omonia.

How many can you eat? Go to Divan and test your stamina.

This wildly indulgent sugar bomb comes two different ways. Ekmek kataifi consists of crispy kataifi pastry layered with custard flavoured with mastiha (an aromatic resin), then piled high with whipped cream and sprinkled with chopped nuts and cinnamon. Ekmek Politiko is a bread pudding soaked in syrup, topped with traditional kaimaki ice-cream (often made with buffalo milk, this vanilla flavour is spiced with ground orchid root). Some of my favourite places to eat ekmek are Chara and Pelit in Kypseli, To Serbetospito tis Nancy in Psirri, and Belle Vue in Nea Smyrni. 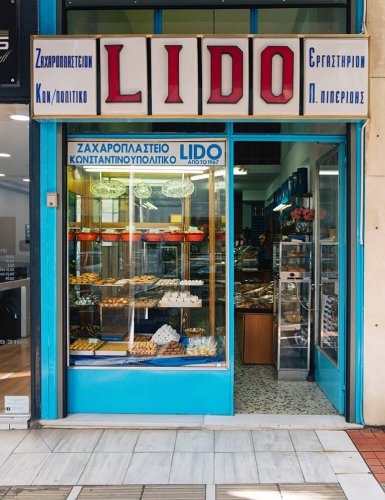 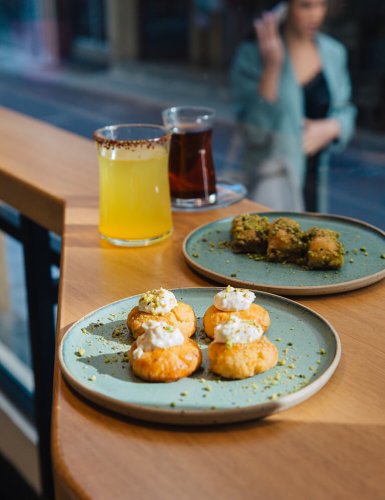 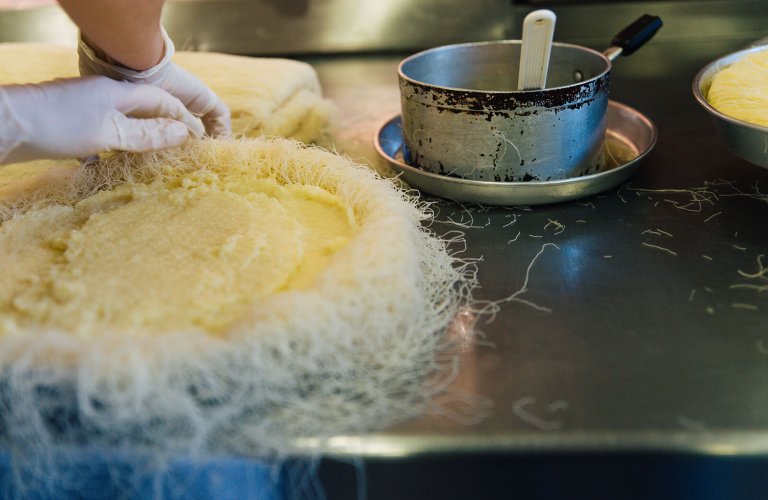 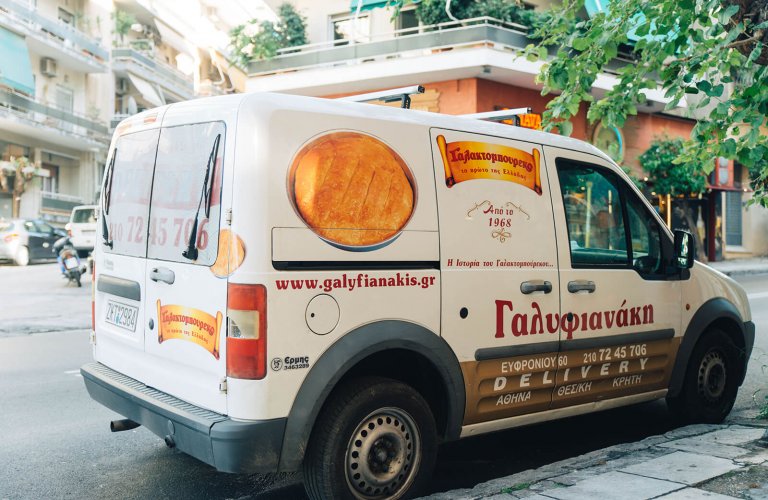 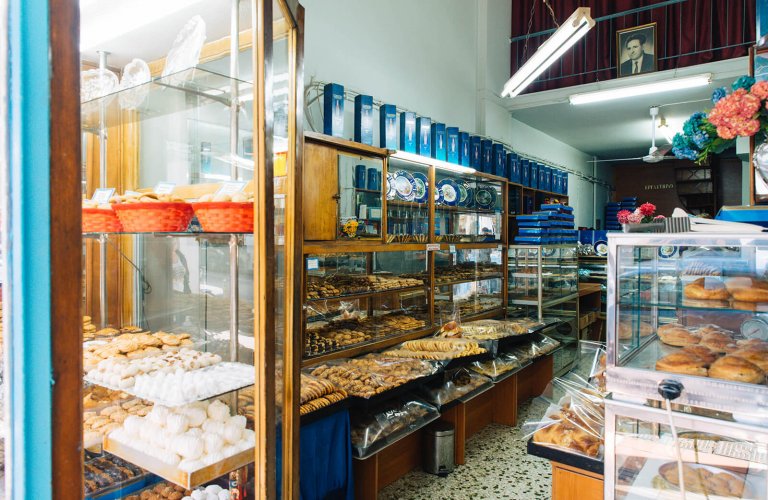 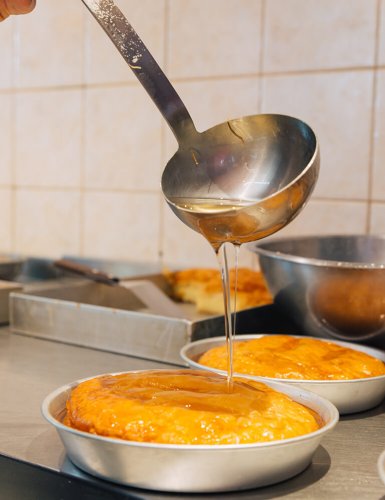 Old-school is the best school.

At Feyrouz, desserts are meant to be shared.

Galaktoboureko in the making at Galifianakis.

Galifianakis' transporter of all things sweet.

When heading to LIdo, think ahead, buy as much as you can carry.

Galaktoboureko loves its syrup. Get your fix at Galifianakis.

Greeks have been devouring this syrupy custard pie since Byzantine times. Layers of crispy filo are brushed with clarified butter then filled with a rich, milky custard thickened with semolina. Once the pie is baked, it’s baptised in syrup. The Athenian specialists of this comforting treat are Kosmikon, Varsos, and Galifianakis—three historic pastry shops that have kept their family recipes secret for decades. (For a decadent twist, try Kosmikon’s kataifi galaktoboureko.) Another of the best spots for galaktoboureko in Athens is Mastronikolas, a dairy and pastry shop keeping the residents of Piraeus sweet since 1909. If you can handle the high sugar intake, try their warm galaktoboureko with a scoop of Mastronikolas’ delicious sheep’s milk ice-cream.

Add a scoop of ice cream to your ravani for ultimate palate pleasure. Try Lido's.

Greeks love to bake and eat sponge cakes soaked in syrup, especially when they come with a scoop of refreshing ice-cream or tangy yoghurt. Ravani is a semolina-based cake drenched in citrus syrup and often served with ice-cream. Try this traditional Greek dessert at Lido in Pangrati or Papaparaskevas in Glyfada, where it’s topped with a layer of creamy custard sprinkled with cinnamon. Maxim is famous for karydopita (honeyed walnut cake), made to a family recipe brought over from Istanbul. Pnyka bakery does a wonderfully moist portokalopita, filo pastry layered with oranges and steeped in (you guessed it) lots and lots of syrup.

Deep fried batter, soaked in syrup that’s crispy on the outside and oozing inside. What’s not to like? Touloumbakia should be prescribed as antidepressants, especially the bite-sized ones: the moment you pop them into your mouth, there’s a juicy explosion of syrup. Sure, they are very, very sweet—but trust me, after a glass of ice-cold water you’ll be ready for another. Ice Cream Mustard Toula, an old-fashioned patisserie in Pangrati, is where lots of Athenians go for their sugar high and her touloumbakia are divine. Chatzis is particularly famous for kourkoubinia, bite-sized rolls of crispy filo (no filling here—just pastry soaked in syrup). They also make a giant touloumba, that looks like an ice cream cone, stuffed with buffalo clotted cream. 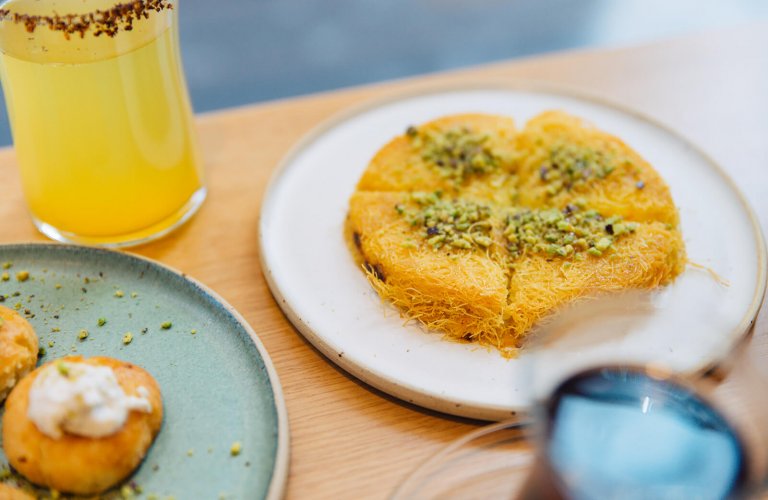 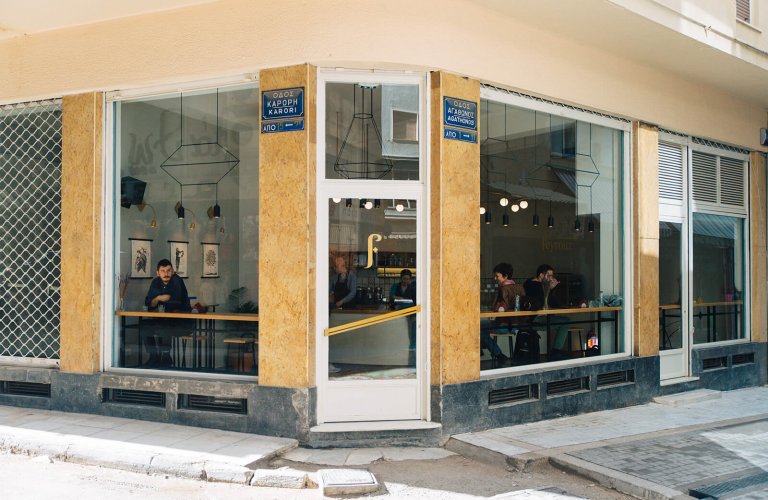 Ravani deserves a gold table cloth, like this one at Lido.

Go for more than one choice at Feyrouz.

Calories must be forgotten. Galifianakis will make you.

Zoom in, dig in. Baklavadakia at Divan.

Feyrouz is making history in the Historic Centre.

Where to Find the Best Pies in Athens