One of the busiest ports in Europe, Piraeus has for centuries been a melting pot of sailors and merchants arriving from every part of the globe, alongside the reams of immigrants and colonisers who have also landed ashore. These culturally-diverse influences have woven their way into the local commerce, gastronomy, arts and entertainment scenes.

There are some “old guard” landmarks that you might want to tick off first to give an important cultural context to present day Piraeus: the local Municipal Gallery, with its marine-themed haul of Greek art from the past 300 years or so (you’ll also catch contemporary art shows from time to time); the Hellenic Maritime Museum and the Piraeus Archaeological Museum.

These days though, the loudest art buzz is to be found in the Piraeus portside neighbourhood of Agios Dionysios (also known as Papastratos). Once a site of heavy industry dubbed "the Manchester of Athens" by the 20th-century Athenian middle-class, Agios Dionysios is full of large industrial buildings. They’ve made rich pickings for real-estate developers and eagle-eyed investors who are rapidly turning them into sleek developments amid the garages, metal workshops and warehouses.

Among the art professionals who have colonised the area in recent years are international galleries like Rodeo from London and Carwan from Beirut. Both have established new spaces here, sharing the neighbourhood with restaurants, night clubs, office workers and blue-collar locals. The arrival of these cosmopolitan galleries has transformed Agios Dionysios into an art-lover’s hotspot well worth making a detour from downtown Athens for.

Meanwhile, whether by chance or by design, Piraeus galleries are now luring visitors from abroad as well (outside lockdown at least). Within walking distance from the port and only a short taxi ride from the nearby yacht marinas, Polydefkous Street in particular has become an art stop for canny collectors en-route to their Greek island holiday homes every summer. 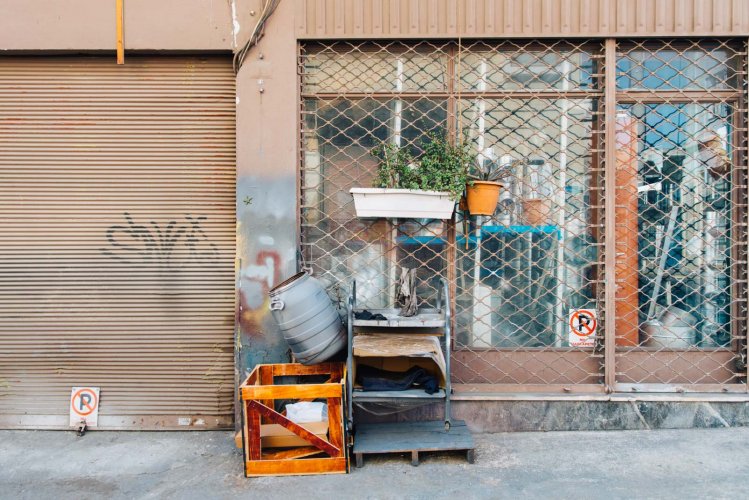 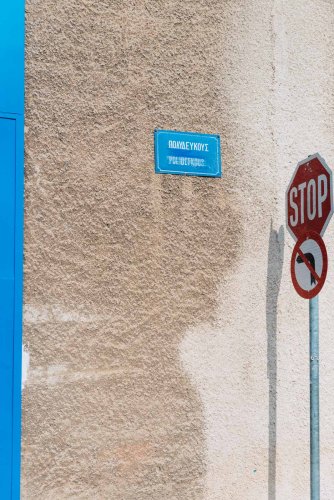 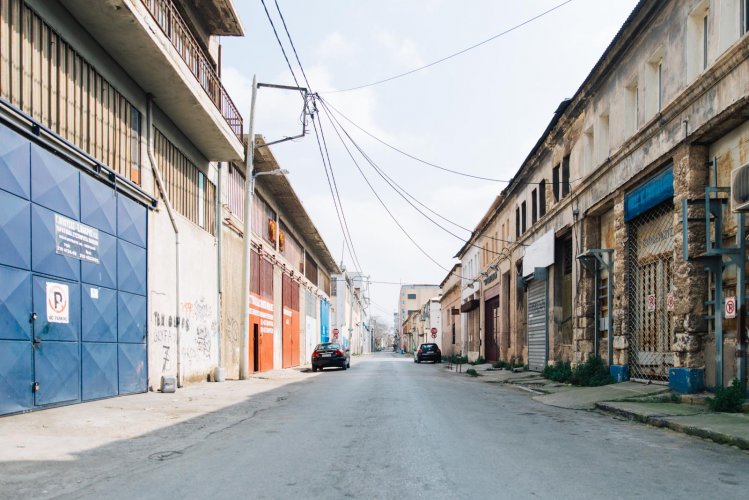 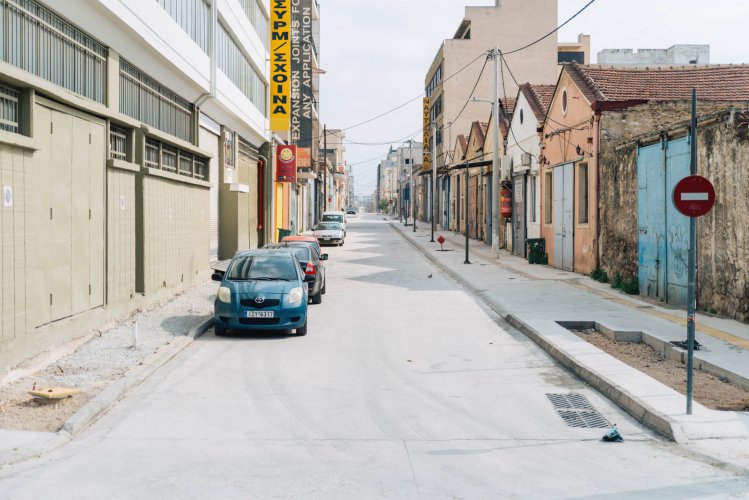 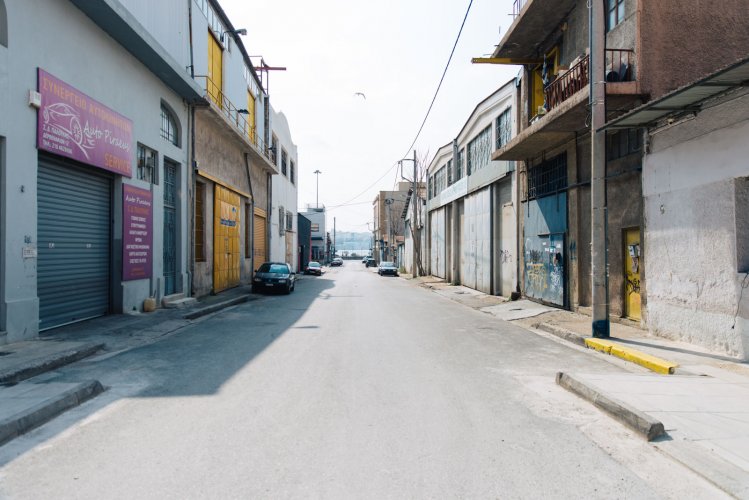 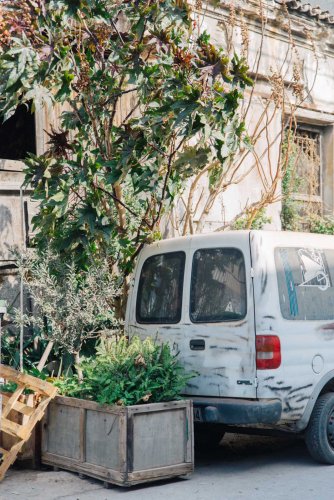 First on the scene at Agios Dionysios was Dimitris Lymperopoulos' DL Gallery. Raised in a family of Piraeus frame makers and art dealers, Lymperopoulos transformed his father's former factory into a gallery in 2015.

The large industrial space with its 1950s glass façade was more than suitable for exhibiting contemporary art, especially large sculptures and installations. To accommodate his growing roster of artists—which includes local and foreign names like Greek painter Dimitris Yeros and Portuguese photographer Virgilio Ferreira—Lymperopoulos acquired an old warehouse opposite his gallery and opened a second one. ENIA gallery is now DL Gallery’s next-door sibling. The former is dedicated to conceptual art and installation, whereas the latter tilts to contemporary painting and photography.

Growing up in Agios Dionysios has allowed Dimitris Lymperopoulos to witness every step of the area’s post-industrial decay and current renaissance. "Every building you see here houses workshops, businesses, craftspeople”, he explains. “Not all of them stand empty. During the day you can hear their machinery working. Agios Dionysios is still very alive and busy."

Housed in a former warehouse built in the early 20th century, Rodeo Gallery has kept its old façade, so it blends in seamlessly with its surroundings. Upon entering, you find yourself in a cool cavernous space. The stone of the walls and the original wooden roof have been left exposed, and a sleek box containing administrative spaces has been added in the middle by Berlin-based architect Etienne Descloux.

"It is a rather challenging space for exhibitions," gallery founder Sylvia Kouvali admits. "A white cube can be treated as a blank canvas. A stone wall is no blank canvas. That said, it's interesting to offer this space to artists. Artists today have a need to work with the space they exhibit in, which is part of the post-conceptual tradition we are going through now."

Rodeo Gallery was the first gallery to open on Polydefkous Street in 2018 and its programming is based on long-term collaborations with artists, most of whom use a variety of media in their work. The mix of artists’ backgrounds is international in scope and surprisingly diverse. For example, recent shows range from solo exhibitions by Greek painter Apostolos Georgiou, who was born in the 1950s, and young London-based artist Sidsel Meineche Hansen, whose work is a whimsical mix of digital media, contemporary drawing, sculptural objects and installation. Both exhibitions activated the space in different ways.

Floating somewhere in between polished and rough, Rodeo’s Piraeus space is one of the successful examples of how galleries can experiment with curating shows and activating repurposed spaces in Athens. Visitors often hang out at the benches of the wine bar next door, which are planted out on the street. Opening nights (in the pre-Covid-19 days at least), synced with neighbouring galleries, turned into lively block parties.

On the heels of Rodeo, art advisor Artemis Baltoyanni opened The Intermission on Polydefkous Street in 2019. The Intermission doesn’t have its own roster of artists, but instead invites artists and the galleries that represent them to exhibit at its space. So far Baltoyanni has hosted three exhibitions with two artists: the acclaimed American conceptual artist John Knight and emerging Athens-based artist Zoë Paul.

The Intermission is housed inside a former car workshop with stone walls and a high ceiling with a wooden roof — the same situation as Rodeo. In fact, the entire block used to be one interconnected facility, hence the architectural echoes between all the galleries here. Most of Baltoyanni's neighbours opted to keep the stone walls of their spaces exposed. She went for a more clean-cut, white-cube approach instead. The white walls work wonderfully with the bright natural light that floods in from the floor-to-ceiling windows, adding a special glow to the space.

“Piraeus has a very particular identity, which I like,” says Baltoyanni. “It's gritty and noisy and full of people. But at the same time it's so urban and full of pockets to discover. Also, artists and galleries want to come here to exhibit. Piraeus is not isolated: we have the Athenian audience that comes here, and there's buying interest locally."

The most recent arrival to Polydefkous is Carwan, a contemporary design gallery that was founded in Beirut in 2011 and touched down in Piraeus in 2020.

Architect and curator Nicolas Bellavance-Lecompte, the gallery’s co-founder, and his new business partner, architect Quentin Moyse, renovated the space together. Their intention? To preserve the building’s aesthetic qualities and replace what was broken using the simplest elements possible. The space is a very organic addition to Piraeus’ new gallery street: when the Athenian sun is not too high in the sky, visitors are greeted outside and the street becomes an extension of the gallery.

Carwan's programme has consistently championed contemporary design from Western Asia and the Mediterranean. The gallery currently focuses on what Bellavance-Lecompte describes as “conceptual design”, work by designers that borders contemporary art and collectible design. The gallery’s opening show in Piraeus featured a collection of one-off bronze vessels by Vancouver-based designer Omer Arbel. The gold-hued pieces were cast in glass moulds that broke as the molten metal cooled in them: a great example of how design and manufacture can veer into the poetic.

“Moving to Greece has opened up a lot of new potential,” says Bellavance-Lecompte. Without doubt, the arrival of so many international galleries in Piraeus has upped the ante for the local art scene and is sparking new collaborations. It has also established a fresh way for exhibiting and viewing art: one that is slower and, even by Greek standards, more social and communal. 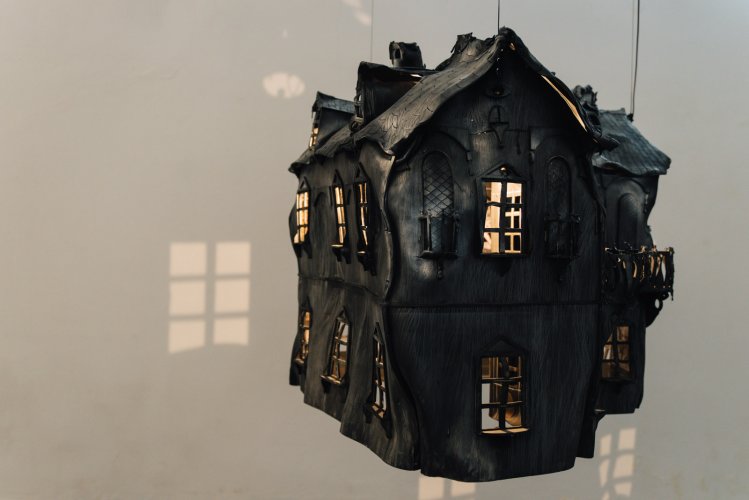 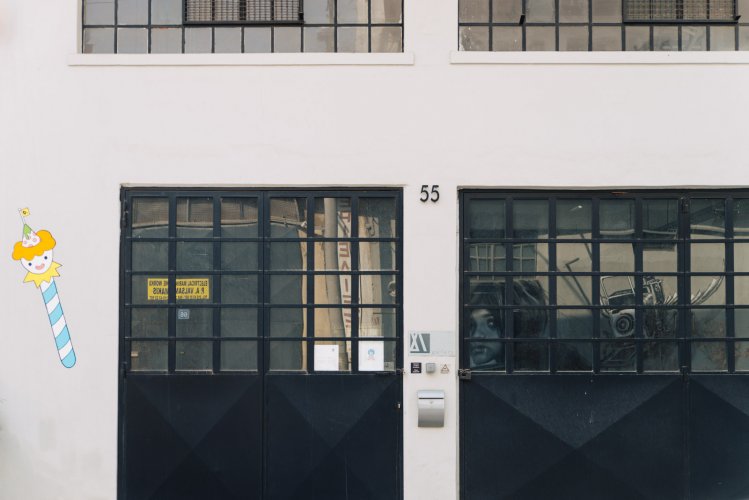 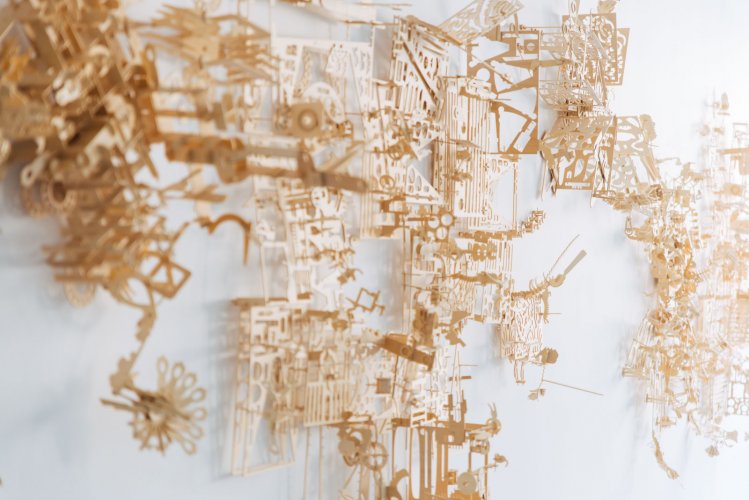 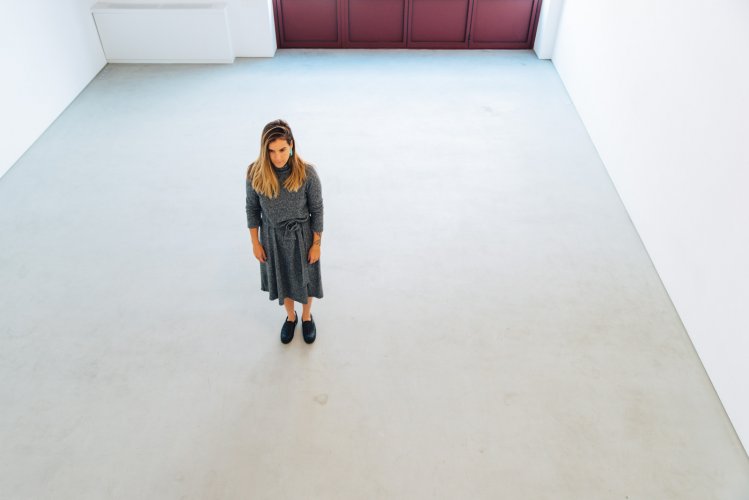 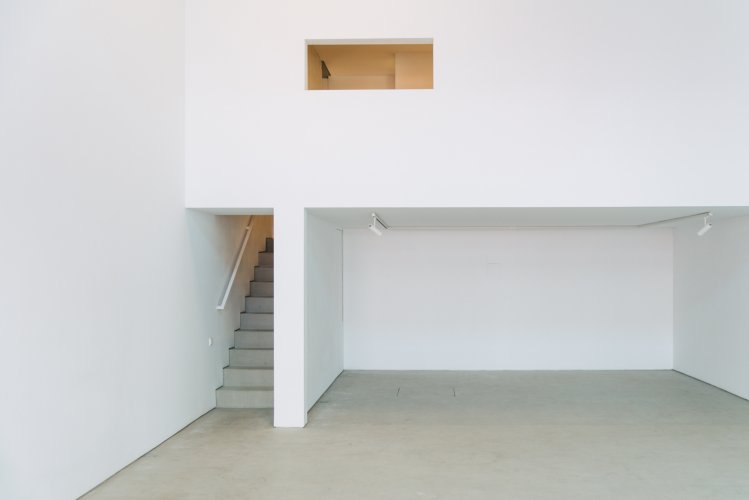 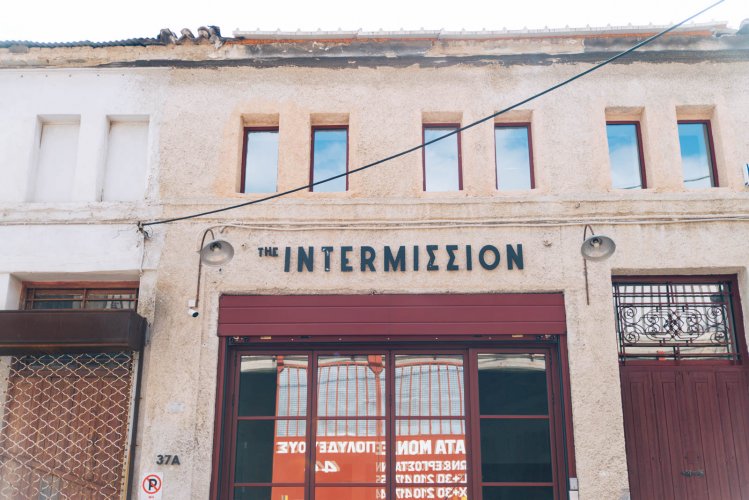 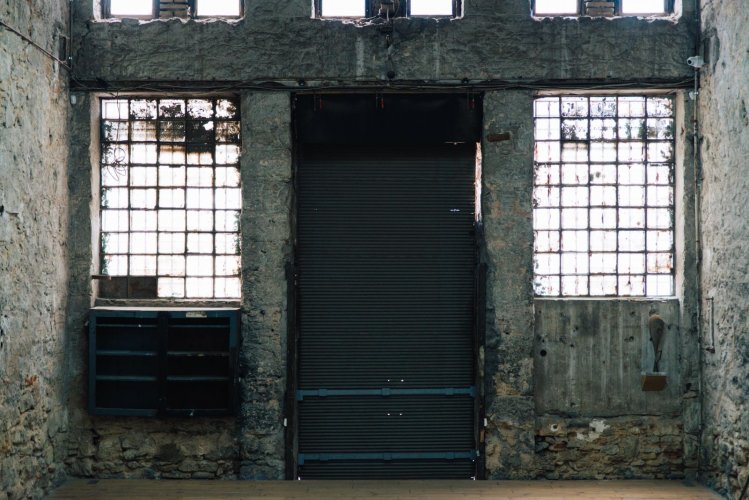 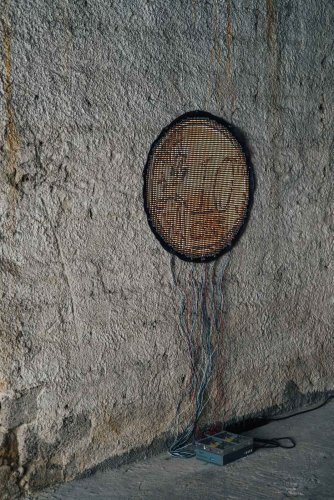 A Gallery Walk in Thissio and Petralona