Athens is emerging as one of the most vibrant skate cities in the world. Skateboarders have been a driving force behind the creative renaissance brewing in the capital. Skaters' DIY attitude has helped them find opportunities and inspiration amid the economic collapse, taking advantage of cheap real estate or empty spaces.

Take Latraac, an experimental social space built by Greek architect and skater Zachos Varfis. In the gritty Keramikos neighbourhood, hidden behind metal gates, a small bar/café and some trees that provide much-needed shade, sits a laser-cut plywood skate bowl. Latraac has fast become a mecca for skaters of all stripes, as well as foreign artists, musicians and expats. There’s nothing quite like it, in Greece or anywhere else. You can stumble upon avant-garde dance, far-out music nights or bowl contests for the core skate crew.

Thrills and spills stack up at Latraac skate park.

Teaching kids the moves at Latraac.

This sunny Sunday afternoon, the usual sweat-drenched twenty-somethings have been displaced by a younger crowd: covered in bright face paint, children are playing gingerly with skateboards as the enormous ramps tower over them. Today, Latraac has been overrun by Free Movement Skateboarding (FMS), an Athens-based NGO that uses skateboarding to promote social integration for young Greeks and refugees. Founders Will Ascott and Ruby Mateja, from the UK, realised that young people living in camps and squats struggle to enjoy physical exercise and interaction with children outside the refugee community. To challenge this, they built a mobile skatepark to transport to playgrounds and refugee camps around the city. They teach up to 150 kids every week—around 50% of them are girls.

“Skateboarding is a really powerful tool to naturally promote integration and create a community ethic,” Ruby explains. “It's about getting kids out of the camps and mixing with Greek kids, who also need more opportunities to play and be creative.” FMS recently collaborated with Germany’s Endboss Projects to create the first permanent skatepark in Europe built for refugees. Greek artist Maria Papadimitriou offered her vacant Souzy Tros Art Canteen, an art, food and events space, just a one-minute walk from Eleonas refugee camp. The purpose-built park offers a private, enclosed space to teach both sport and art, especially for young women, who often feel too intimidated to join in. FMS have donated skateboards and safety equipment, and hope Souzy Tros will create a new social space for young people from across the city.

Young refugees get active with local children at Latraac.

When Athens' hardcore skaters aren't perfecting their kickflips, you'll most likely find them at Color.

You’re almost certain to find skaters socialising outside Color Skates in Psirri. It’s on Protogenous Street, peppered with vintage clothes, record stores, and bars where skaters, punks and hipsters congregate on summer nights. Founder Vassilis Aramvoglou holds court on a bench outside the store, surrounded by a rabble of team riders as he scrawls out a hit list of street spots, resting on a dog-eared copy of Thrasher magazine. Color was born in June 2008, on the eve of Greece’s financial crisis. Color helped the skate scene rise from the ashes, by organising a succession of raucous events, parties and contests across the country and pushing for the construction of public skate plazas. When work in the creative industries had all but dried up, Color's hardware and clothing brand, Goodbie Skateboards, offered a lifeline to Greek artists who design their boards and tees. Color are now the most successful skate team in Greece—and arguably, the rowdiest. 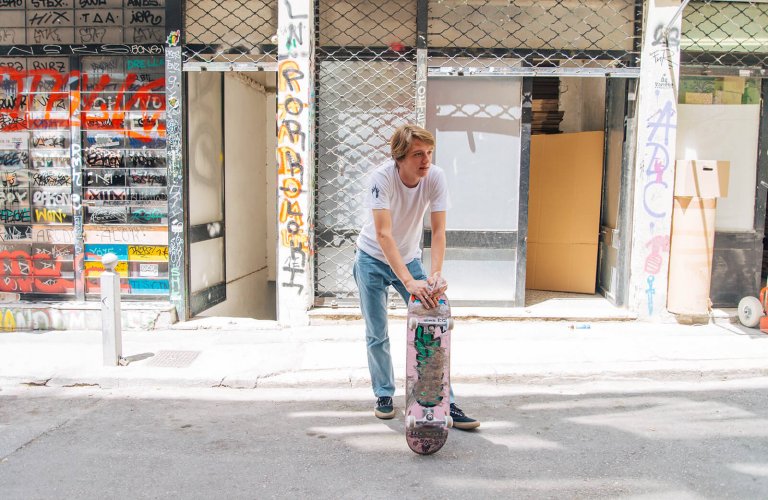 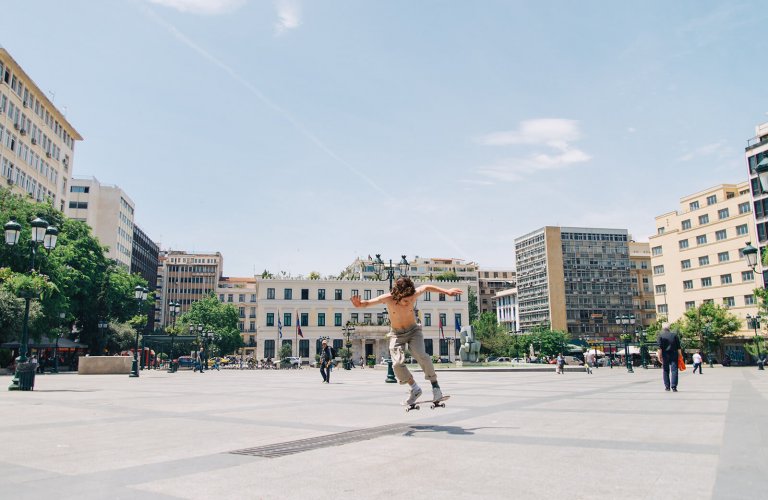 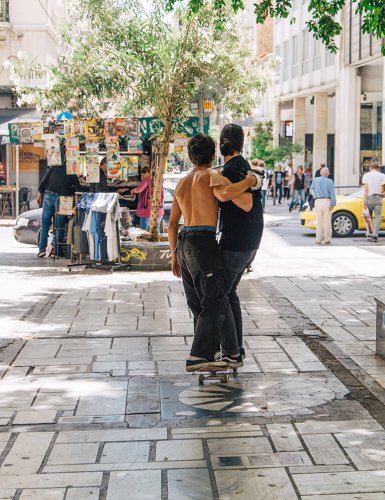 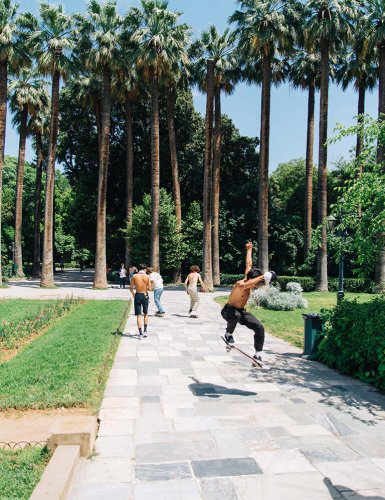 Taking a time-out on Protogenous Street.

Making an entrance in the National Garden.

“These guys know the city better than anyone else,” Vassilis says. As the team set off, the thundering of polyurethane on tarmac echoes through Psirri's narrow, Ottoman-era streets. They burst out onto Athinas Street, adding another layer of chaos to the street's usual hubbub. After taking turns to flip over a metal grate on Kotzias Square, next to Athens' ancient fortifications, they cruise up pedestrianised Aiolou Street, weaving in and out of bemused shoppers. Heading up Lekka Street, they pass Ministry of Concrete—another store with its own team—before emerging onto Syntagma Square. Riders grind a metal-tipped ledge, then lounge on the marble stairs below the Hellenic Parliament, as Manos Kyriakousis nails a huge air over their heads.

Great skate spots abound across Athens, but the best street-style park is a metro ride away at the OAKA Olympic Complex at Marousi. Jumping off Line 1 at Eirini Station, you can cruise under the iconic arches of Santiago Calatrava’s stadium to the skate and BMX park. 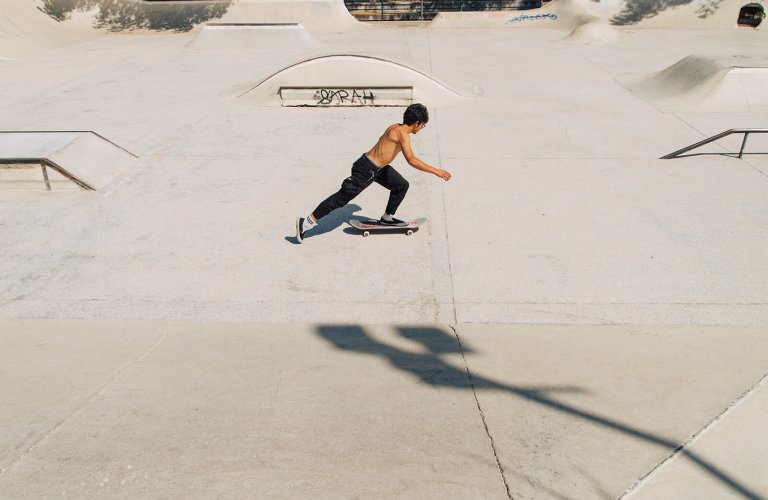 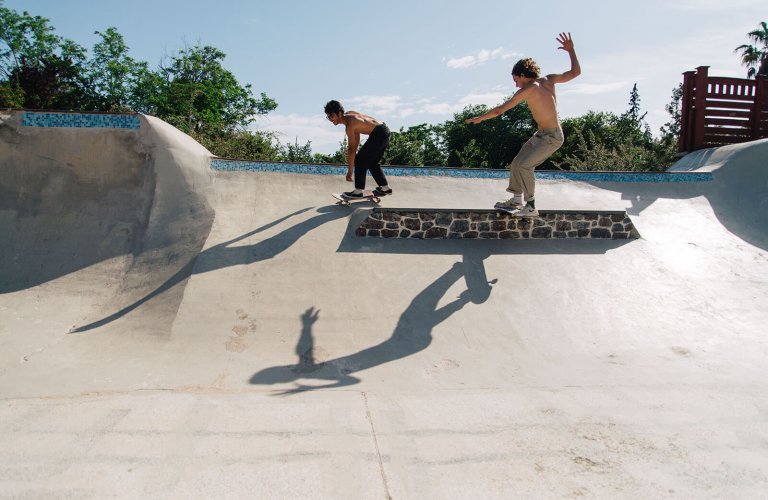 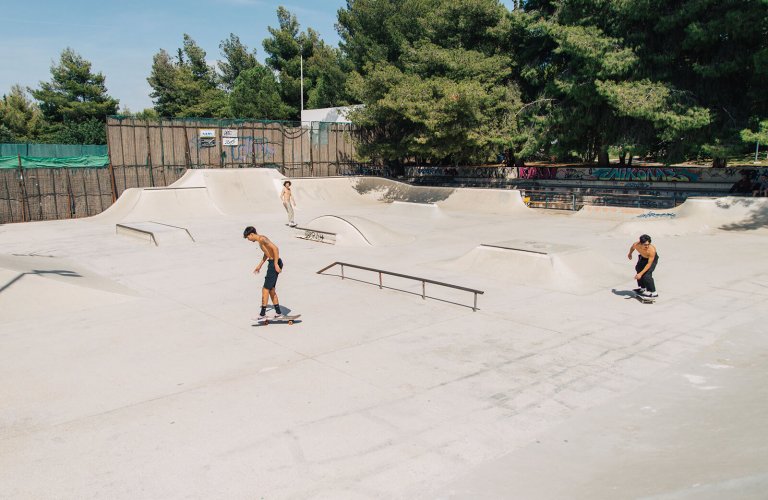 From here, it's a manageable push to the Galatsi DIY in Veikou Park, which also boasts an outdoor cinema and theatre. The sprawling concrete park oozes mellow, Venice Beach-vibes. The blazing sun, too, is a reminder that the Athenian climate rivals that of Southern California—the spiritual centre of the skateboarding universe.

With American pros like Curren Caples dropping by to check out the heat, visitors and locals alike are starting to recognise skateboarding's growing impact on Athens’ culture and architecture. While the crisis may have sapped energy from many scenes, skateboarders have long been at the vanguard of Athens' grassroots resurgence. Because, unlike so many others, they never lost hope in this vast, sun-bleached concrete playground.