Those who don’t just want to see the Acropolis, but understand its role in ancient Greek society and its enduring relationship with the rest of the city. Oh, and anyone with an appetite for authentic Greek treats.

Despina Savvidou, a septuagenarian powerhouse who has been leading groups around Greece (in English, Greek and German) for nearly four decades. She’s living proof that an hour of pilates a day is the secret to eternal youth.

Gleaning just how much Athens’ multi-layered history comes together in the one city: ancient and modern Greek, Roman, Byzantine and Ottoman - all jumbled up together. And learning how democratic ideals were deeply ingrained in the social fabric of ancient Athens (as long as you were male!).

A Greek breakfast in Koukaki before ascending the Acropolis hill (via the Odeon of Herodes Atticus). You’ll enter the Acropolis through the Propylaea, survey the Parthenon and other temples; then stroll Anafiotika and Plaka to wind up in Monastiraki (for more food).

We’re here and we’re ready to experience the Parthenon in all its glory and understand how one of the world’s most iconic landmarks came to be. A traditional Greek breakfast of Greek yoghurt with honey and crumbled hazelnuts, washed down with a cup of coffee, is our reward for such an early start: 8:30am—almost unheard of in Athens. But before long, the wisdom of getting up early becomes clear. As we start our climb up the Acropolis hill, the strong Attica sun is already making its presence felt for our group of four Brits, recently arrived in town, and a Greek for good luck.

Our guide Despina steers us into a patch of shade. We have a clear view of Mount Lycabettus, the highest point in Athens. Here, we find out why the ancient Greeks passed up Lycabettus and chose the hill we’re standing under instead for their legendary citadel.

“Although the superior height of Lycabettus would suggest it was the more strategic location for the Acropolis, there was no water source,” explains Despina. By contrast, we learn, the Acropolis hill has fresh water springs, able to sustain a population sheltering inside its walls during times of siege (of which there were many!).

Despina goes on to explain what’s different about this ‘Acropolis Premium Tour.’ It’s not just great snacks—although there will be more of those—but a focus on implanting an understanding of what the Acropolis really meant to the ancient Greeks and how it might have felt to be here in ancient times.

“We have a strict ‘no dates’ rule,” Despina stresses. “Why? Because dates don’t aid our understanding of what’s important.” Oh, and we also get to skip the (lengthy) queue and head straight into the Acropolis.

Midway up the slopes of the Acropolis hill, the next strategic patch of shade that Despina chooses to park us in seems unremarkable. Just giant slabs of stone without any obvious function. Despina explains that we’re actually in an ancient building site and if the stones look unfinished, that’s because they are. The tell-tale signs are the blobs protruding from the smooth edges of each marble block. Carry handles, apparently. The Acropolis was constructed from Pentelic marble—mined from Mount Penteli, 20km away—and dragged here by oxen.

“If you go to the suburb of Chalandri, you can still see traces of the pathways that they used to transfer the marble from the quarries all the way to the city,” Despina tells us.

Once here, workers would use wooden cranes (surprisingly advanced for their day, in the pictures Despina shows us) to manoeuvre them into place, before chipping away the carry handles to create the perfectly polished marble surfaces of the Parthenon, as we know it. It’s a great insight into the tricks of ancient construction.

Ancient pandemics and the changing face of the Parthenon

As we continue up the Acropolis hill, Despina reveals how plagues were a fairly common reality of ancient life. Evidently, a major epidemic occurred roughly every 50 years. While we don our masks and lean on science to keep the current Covid menace at bay, all the ancient Athenians had to rely on were offerings to the gods, such as Asclepious, the god of medicine. It sure puts things into perspective.

“Some ancient plagues killed up to half the citizens of Athens,” Despina tells us.

We reach the Propylaea and enter the ancient citadel of the Acropolis, where we enjoy a commanding view over Areopagus hill, to our north-west (also known as the Hill of Ares). Beneath the mighty Doric columns, we hear about the geometric and mathematical genius that has made the Parthenon one of the planet’s most admired architectural achievements. We also learn the secret to instantly spotting if any temple around the world is Greek by design (no spoilers).

“From a distance, you think the Parthenon is completely white; but when you come up here, you can clearly see the difference between the newer stones and the older ones,” Despina continues, gesturing towards a restored section of brighter, whiter column.

We begin our descent from the Acropolis and leave the ancient period behind. Despina explains how the Parthenon went on to be converted into a Christian church during the Byzantine period and then an Islamic mosque after the Ottoman empire captured the city. Seeing these transitions mirrored in the city below us drives the point home: Athens is a complex tangle of ancient Greek, Roman, Byzantine, Ottoman and modern construction. 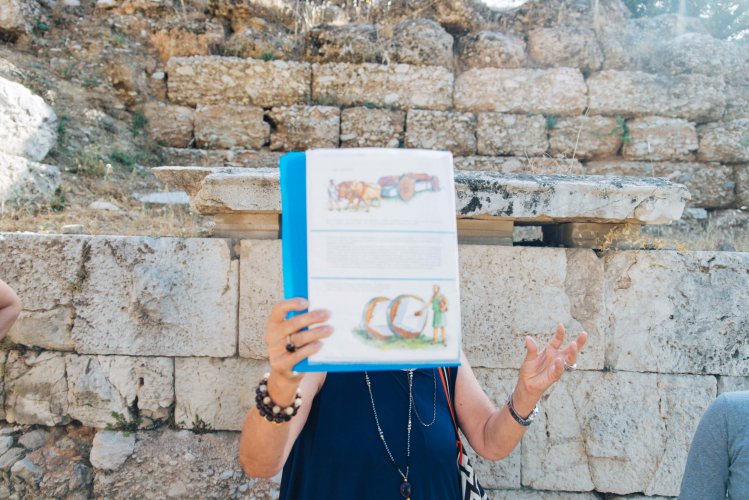 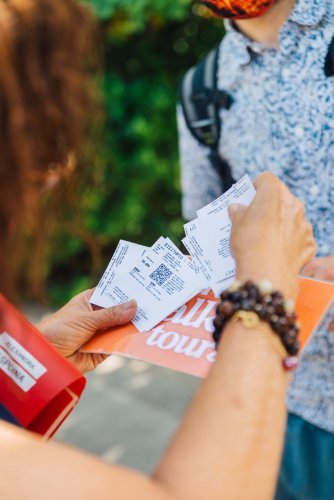 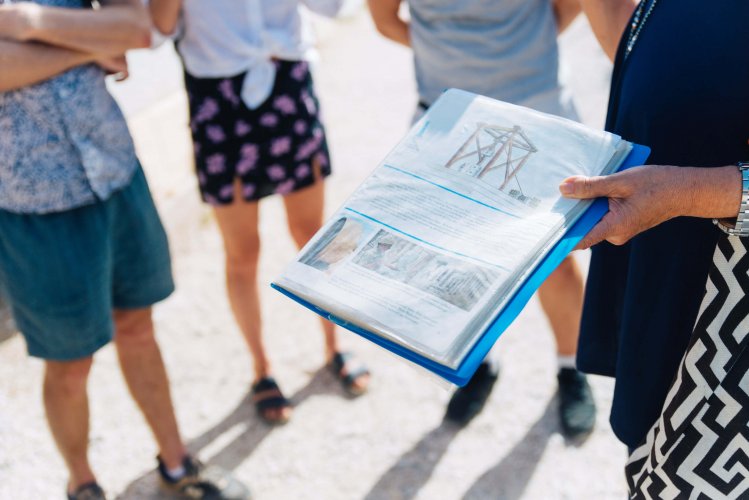 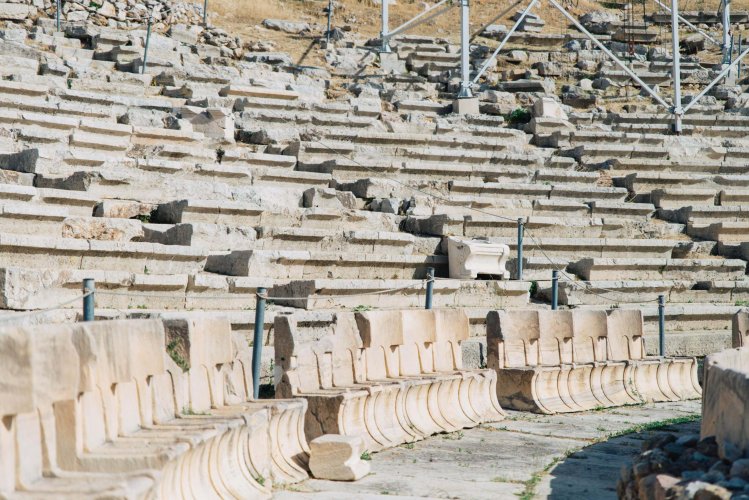 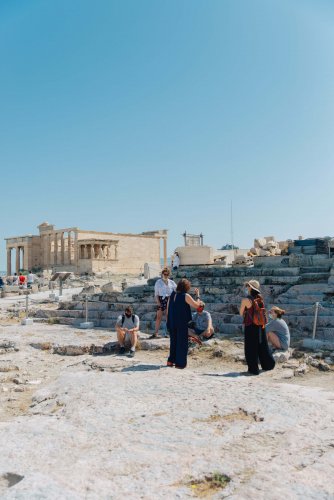 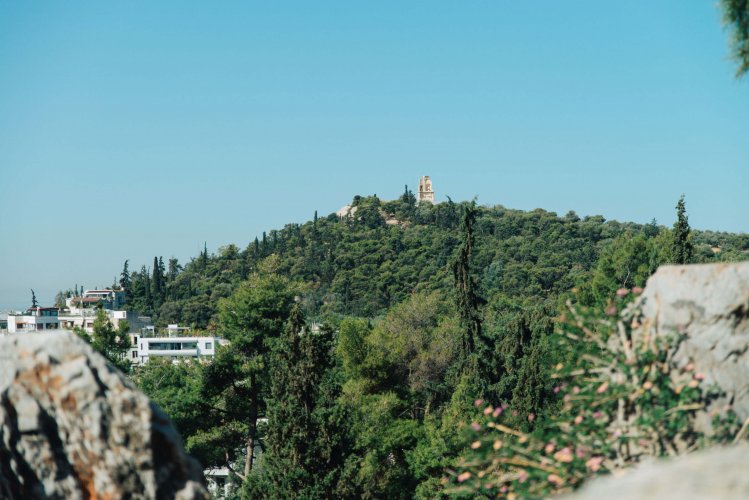 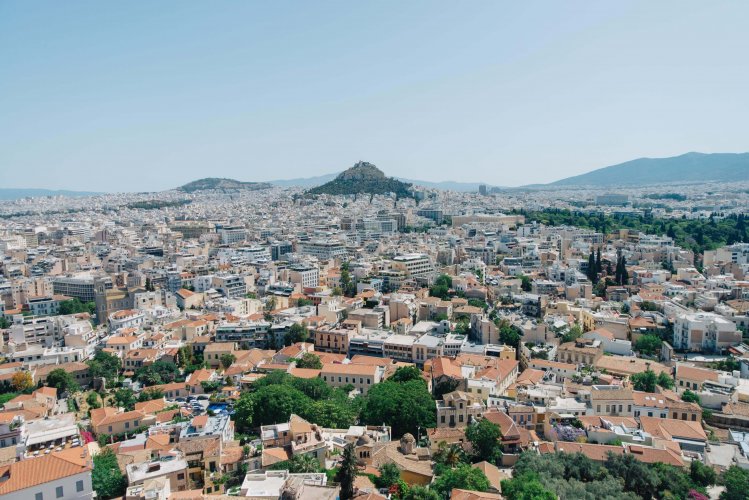 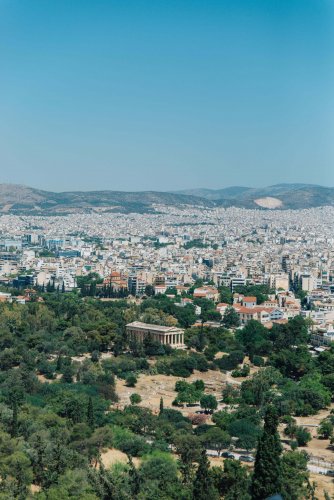 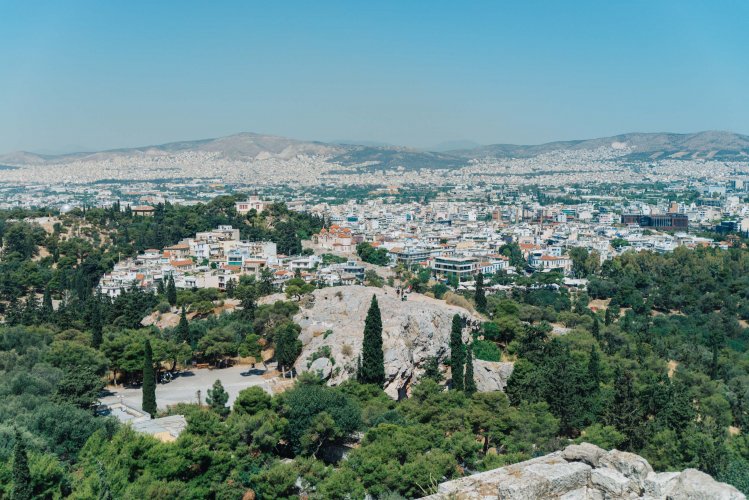 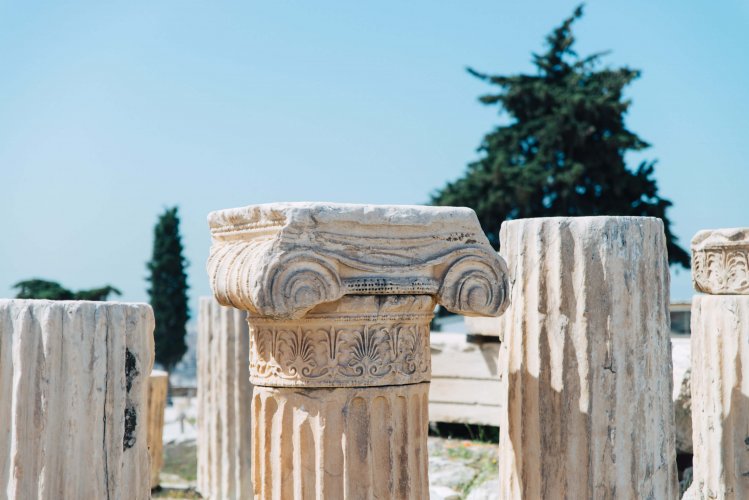 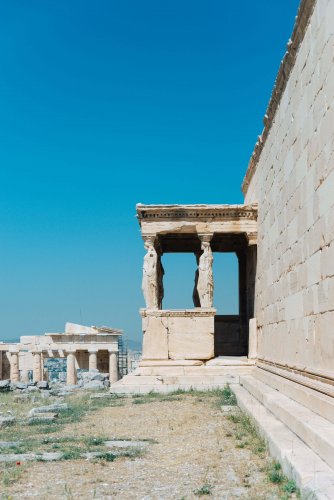 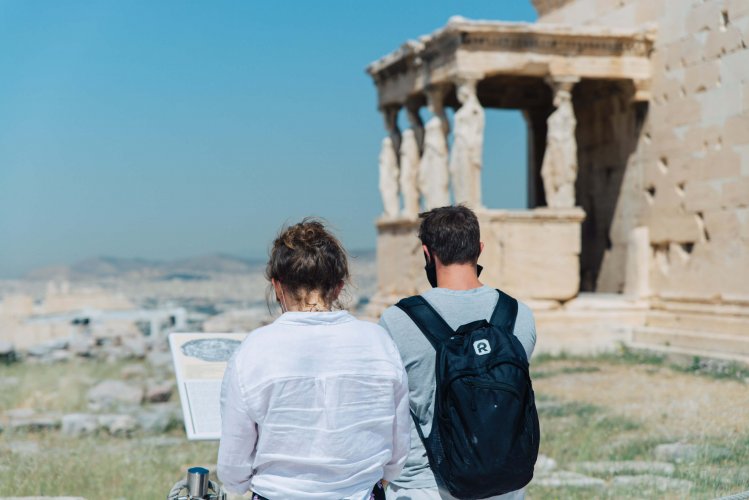 Greek islands in the city and more Greek eats

Suddenly, we find ourselves walking along winding lanes surrounded by flowery whitewashed cottages and snoozing cats. Have we been somehow magically transported to a Cycladic island? No, we’re in Anafiotika. This enchanting pocket of Athens is a reflection of the quaint island homes left behind by the skilled craftsmen brought from Anafi to help build the new Greek capital after the Greeks won their independence from the Ottomans.

Bound for Plaka, we pause further down the slope at the Tower of the Winds, the world’s first meteorological station, created by the ancient Greeks. Once again, it’s time to meditate on how many different layers of history we can see in front of us all at once, in just one small area of Athens: an ancient Greek weather station, a Roman marketplace, an Ottoman mosque and modern Greek neoclassical villas.

Despina now draws our attention to an unassuming wooden doorway in an old stone wall nearby. It’s all that remains of an Ottoman-era building and, apparently, serves as a gateway to a sinister slice of Athenian history.

“This was once a beautiful Islamic theological school during the Ottoman era with a huge garden in the middle,” Despina elaborates. “But later, during King Otto’s reign, it was converted into a prison and the rooms became cells. This tree was where they used to hang people sentenced to death so that all the other prisoners could see.”

“And from this tree, comes the Greek saying: ‘Greet the plane tree for us’ (χαιρέτα μας τον πλάτανο), which we use when someone thinks they will never hear more on the subject again—like a doomed relationship.”

After this somewhat gloomy spectre, we shift gear to end our tour on a more upbeat note. We pass through Monastiraki square, the heart of Ottoman Athens, and into lively Psirri. Here, in Iroon Square, with a bird’s eye view of some of Athens’ brightest contemporary street art, we sample some wonderful Greek delights: spanakopita (spinach pie), tiropita (cheese pie) and the deliciously indulgent bougatsa pastry, Greece’s answer to the custard slice. Nothing beats a sweet ending.

Here’s what my two friends, Freya from the UK and Alexia from Greece, had to say:
“You see the Acropolis every day as you walk around Athens, so you kind of forget about it. But after the tour, you really understand that the Parthenon is much more than an old building on top of a rock.”
“Despina is traditional in her approach but not boring in the slightest. She has great passion for her subject and is clearly still excited to share her stories; without getting hung up on insignificant details. I found that really captivating.”