Home turf to millionaires and popstars, this most commercial of beachy suburbs lies 16km from the Acropolis. Often compared to Beverly Hills, there are luxe, leafy pockets where you could indeed be on Rodeo Drive: jazzy Kyprou and Laodikis Streets with their upscale boutiques, imported palm trees and style-conscious pavement cafes. But Glyfada is a game of two halves. Glam and grit presently exist side by side in this recession-hit postcode, especially in the former social HQ of Zisimopoulou Street, where a slew of boarded-up cafes and restaurants at the lower end evoke less salubrious parts of downtown L.A.

Glyfada’s main retail artery of Metaxa Street runs from Agiou Konstantinou cathedral, opposite the Glyfada Nautical Club. It’s a long, open-air shopping mall of international and Greek fashion chains and shoe shops, serviced by frequent tram stops and fast food outlets. In the 1990s, a United States air base cleared out of this southern seaside hub, leaving behind an American echo in Metaxa’s retro marble shopping arcades and in the country’s first 18-hole pro-golf course.

Glyfada’s prettier, greener and more interesting side streets present a cosmopolitan village vibe and an ever-changing carousel of new tastes and brands to be road-tested on a mostly-affluent audience. The suburb’s character is also nuanced by the many working families who’ve lived here for generations, when Glyfada was still an unassuming coastal town (long before the tram line connected it to Syntagma Square and Piraeus in time for the 2004 Olympics).

Trams are a cheap and easy way to get around Glyfada.

The calm before the (social) storm at Pere Ubu.

Don’t get too attached to that great new Thai place you loved on your last visit. In Glyfada, nothing stays still for long. Old favourites shut down seemingly overnight, to be replaced by new ventures. It’s all about knowing where to look. Again, Kyprou is where it’s mostly at (current hotspots include Sea Spice and Vittoria Gati—on Nymphon Square opposite), along with nearby Laodikis (Café Soleto and Nomi). Together, they form a hip foodie triangle around Metaxa’s southern end. There’s another popular foodie pocket in elegant Botsari, closer to the Agiou Konstantinou precinct of central Glyfada, with Il Salotto one of the star draws. At the same end, O Proedros (The President), in Savva Lazaridi, is a neighbourhood favourite that feels like a Cycladic island taverna with colourful woven chairs arranged under shady plane trees on a whitewashed courtyard. 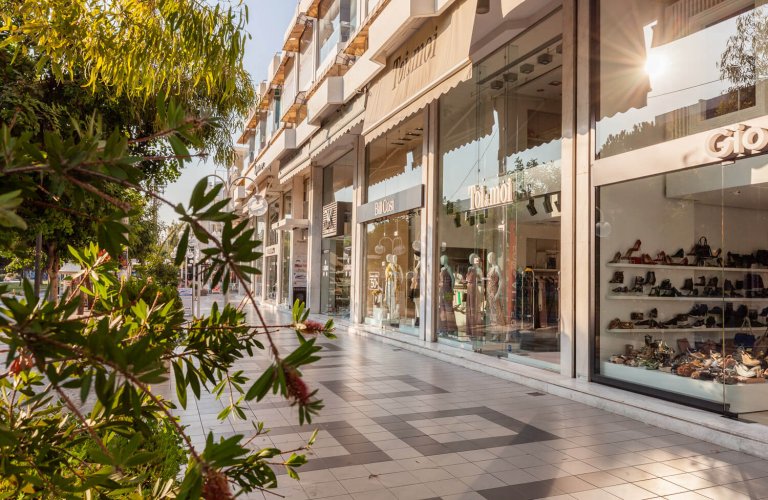 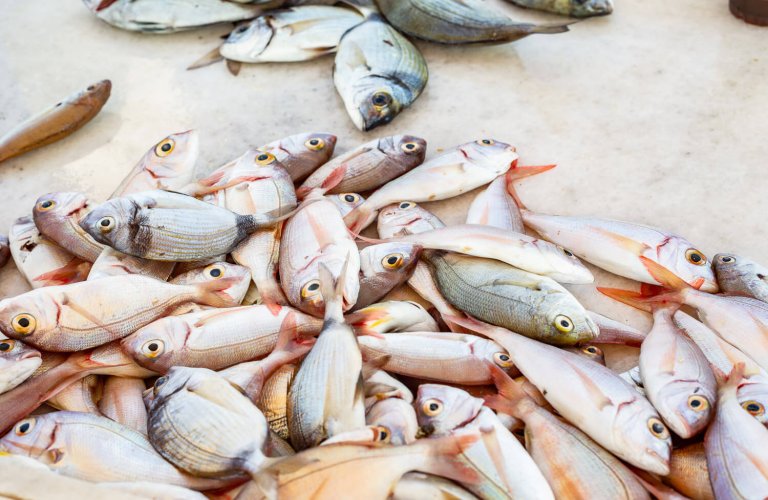 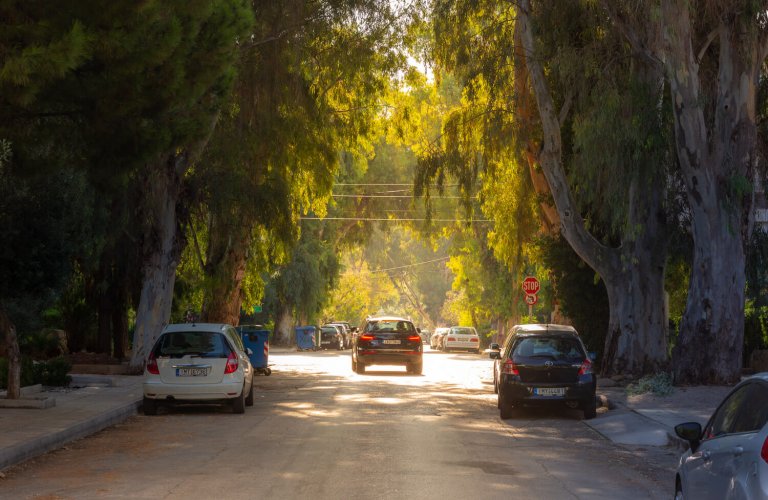 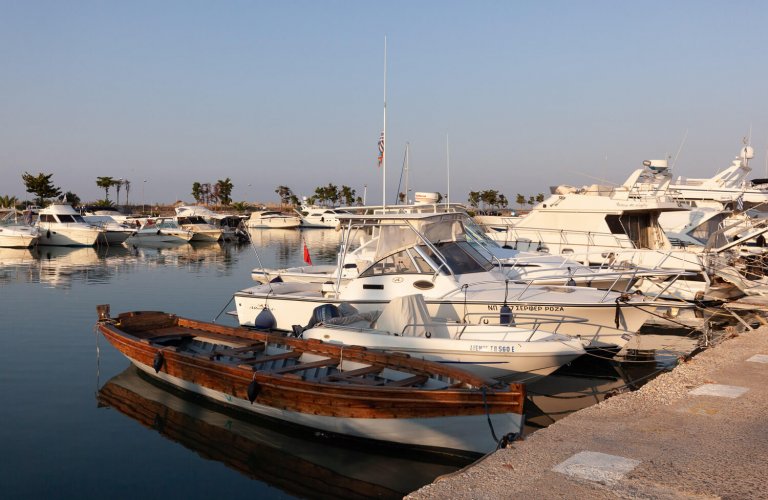 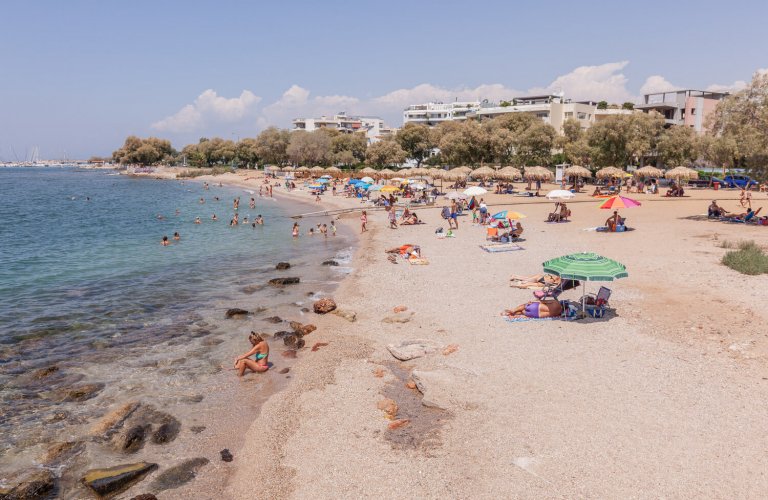 You'll need a few hours at least to trawl Metaxa (and all the arcades inside!).

Just off the line at the Glyfada fish market.

Beach or shop? Your call.

A fisherman inspecting the morning's haul in Glyfada.

A string of perfectly-serviceable public beaches, some with free umbrellas, line the Glyfada seafront. Punctuated by several marinas and cafes, they’re easily reached from downtown Athens by tram or bus (the third beach generally has the better sand and cleaner water). Many locals are happy enough to cool off here; but the peacocks head for the considerably more fashionable and photogenic Asteras Beach Resort about a kilometre further south. Asteras is a long privately-developed stretch of sandy coast divided into separate leisure hubs with valet parking and all-day offerings, including Balux Pool Seaside (with an adults-only seafront pool and beach bar), and chic café-restaurant Ark.

A popular nocturnal playground for grown-ups, Glyfada knows how to turn on the fun for families too. Hygge House café in the Glyfada Centre arcade channels the Danish “happiness theory” for children of up to 10 years in a light-flooded annexe with free creative play areas, arts and crafts workshops and summer holiday seminars in English. Blanos Bowling keeps boredom at bay with a dozen or so lanes, a soft-play enclosure, café and small skating rink. For outdoor play, the revamped adventure park in central Platia Chariton has zip-lines, climbing pyramids, scooter ramps and plenty of green space and picnic tables. Balux House Project is a cavernous leisure spot on the glitzy Asteras seafront strip with computer bays and bean bags for idle teens, plus indoor and outdoor play areas for kids of all ages. For a family outing with a purpose, the Archelon Sea Turtle Rescue Centre, allows children to visit injured turtles being nursed back to health.

Taste your way around the Glyfada laiki every Thursday.

The weekly street market is an ongoing part of neighbourhood life in Athens. Glyfada’s laiki is one of the city’s most popular and well-stocked editions. Held each Thursday along several blocks on Lazaraki Street, people come from all over the south side to hustle for the freshest seasonal produce and the best bargains of the day (such as huge tubs of Kalamata olives for €2; bunches of fresh herbs for €1; and surprisingly stylish kaftans at knockdown prices). They’ll let you taste pretty much everything before you buy and your children will be plied with free sweets at every turn. Locals know to go early in the morning to beat the heat or at about 1 pm when stallholders start selling off everything more cheaply.

How to Do Seaside Sunday Lunch in Athens