Going the Distance: A Guide to the Athens Marathon

490BC. The Persians fall at the Battle of Marathon, despite outnumbering the Athenians four to one. An Athenian herald named Pheidippides is dispatched to Athens, 42km away, to break the news. Once there, he utters the joyous words, νικῶμεν (nikomen)—“we have won”—and collapses. Most historical accounts then have him dying on the spot from exhaustion. This may or may not be a romanticised version of the events; though to be fair, Pheidippides had also just legged it 240km from Athens to Sparta and back again to ask for help when the Persian fleet landed in a bay near the town of Marathon.

Today, more than 1,500 marathon races are organised worldwide. But Greece is where it all began. At the first modern Olympic Games in Athens in 1896, a 42km race from Marathon to Athens featured as one of the defining events of the new Olympic era. It was a way of recalling the ancient glory of Greece. Fittingly, a Greek water-carrier, Spyridon Louis, won the race in 2 hours, 58 minutes and 50 seconds. (Currently, Kenyan runner Felix Kandie holds the Athens Marathon record at 2 hours, 10 minutes and 37 seconds.) Every year, long-distance runners from across the globe challenge their bodies and spirits to retrace the legendary footsteps of Pheidippides. With its combination of hills, heat, and history, many find it to be the toughest—but most poetic—Marathon route of them all.

Every year at 9am on the day of the race, locals and visiting spectators line the streets of Marathon, where the ancient battlefield once stood, to cheer on jittery competitors at the starting blocks. Today, Marathon is a modest coastal town of about 8,000 residents, with a small archeological museum and an artificial lake. The runners pass around the Marathon tomb, the final resting place of the Greek soldiers who lost their lives during the legendary battle of Marathon. They then run near the base of  Mount Penteli, onward to Pallini and finally hit the streets and suburbs of the Greek capital.
Those who’ve run the classic Athens Marathon before—or done their homework—know to dread the uphill stretch after Rafina at around the 18km mark. This goes on until about the 32km, when the route shifts gently downhill to reach the wide, crowd-thronged avenues of the city centre. From there, it’s like a race through history.

Says Athens Authentic Marathon veteran James Phillipson:
“The Athens Marathon was my first marathon and the historic significance makes for an entirely different experience to any other. The finish is the best in the world. Over the last few kilometres, you’re on a downward slope, and you get to take in some of the city’s great avenues and landmarks. The crowning glory is the 100 yard dash into the modern Olympic stadium, which is usually buzzing with a very enthusiastic crowd. To run “the” marathon, instead of just “a” marathon, should be every long-distance runner’s dream.” 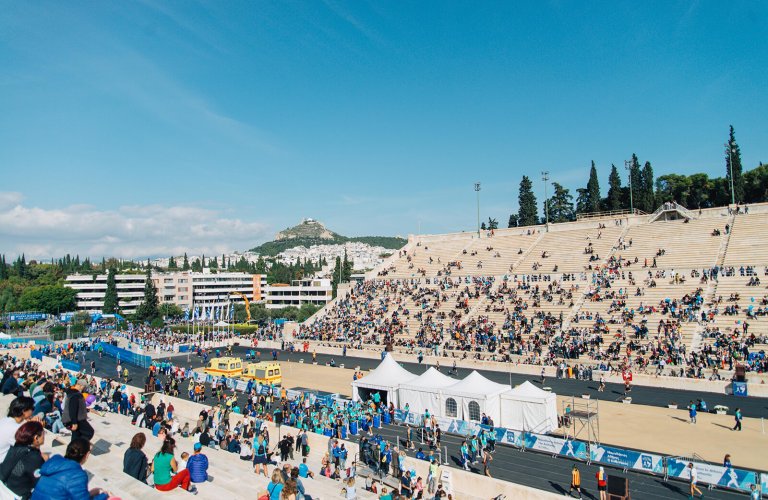 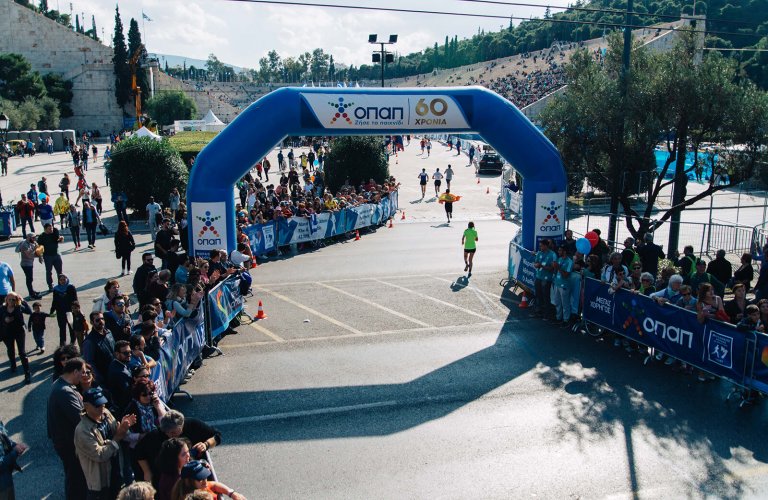 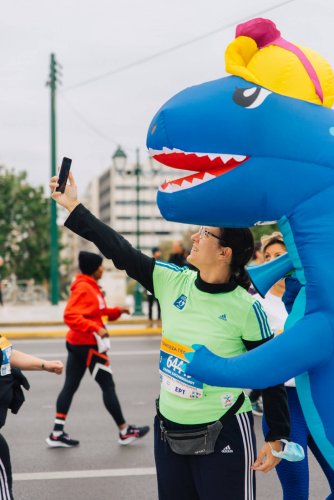 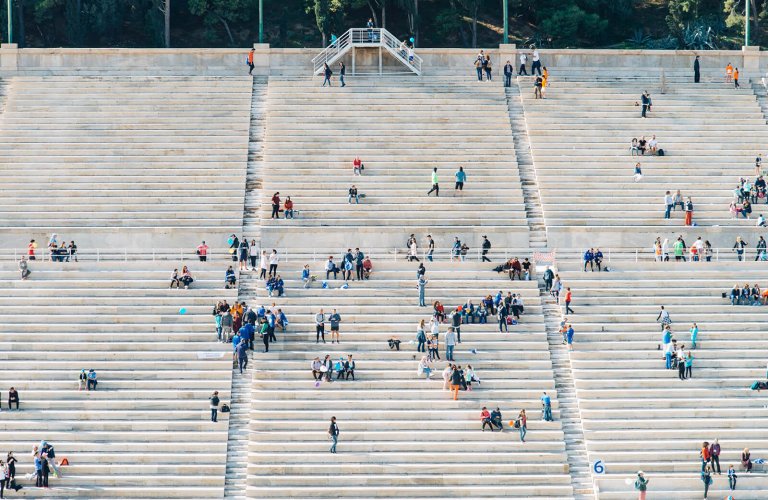 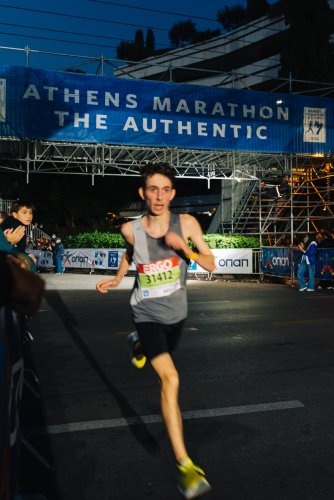 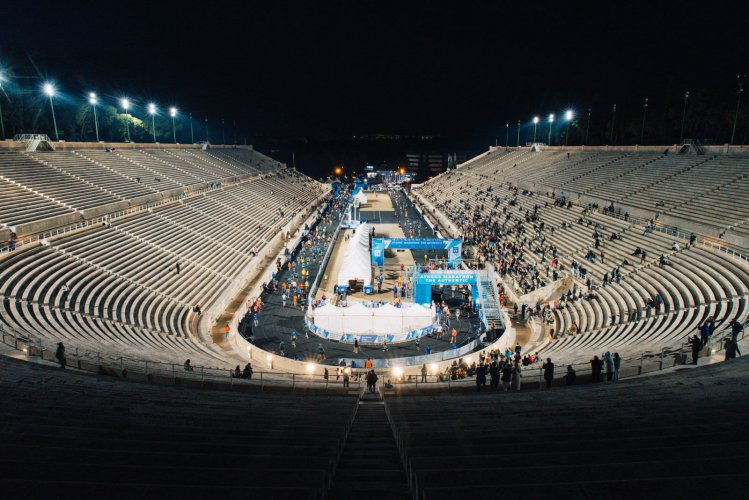 Spectator sport: the best spots to watch the Marathon

Every runner who makes it across the finish line at the Panathenaic stadium, birthplace of the modern Olympics, is greeted with a hero’s applause—regardless of speed, age, or nationality. Many athletes burst into tears, exhausted and emotional. Witnessing these runners finish the race of their lives at such an epic venue is a memorable experience in itself—not to be missed if you’re in Athens, especially if you’re travelling with kids. There’s music, live commentary and the excitement is at fever-pitch.
Take our advice and head to the stadium around 10-10.30am to secure a seat on the marble tiers. You can soak up the party atmosphere and catch the first victorious runners entering the stadium, usually around 11am. Try for a spot on either side of the stadium entrance or right at the back in the centre, where the actual finish line is.

Some other great vantage points are at the 40km mark, outside the Megaron Athens Concert Hall, or a bit further up Vasilissis Sofias Avenue, outside the Hilton hotel. This is where the runners really need you to cheer them on for their final burst of endurance. There’s a grassy pocket across the road from the Hilton that makes a symbolic spectator’s choice. It’s right next to Dromeas (The Runner), a 12-metre tall glass and iron sculpture by local artist Costas Varotsos.
Instagram addicts should head a little further out of the city centre to the Katehaki pedestrian bridge at the 37.5km mark, where you can snap a dramatic aerial view of the colourful stream of runners as they pass below (the closest metro station is Ethniki Amyna).

Run your own best race

The Athens Marathon isn’t just for professional athletes. Thousands of ordinary people from Athens and all over the world register for the other running races that take place on the sidelines: there’s a 5km, 10km, Power Walking Race, 1.2km Special Olympics Race or even a Kids Race (registration for the Athens Marathon usually closes about two and a half months before the race, but you can still sign up for the side events until much later). Depending on your fitness levels, these are all great ways to feel part of this momentous experience.
A decade ago, there were 10,000 participants running through the city in various races during the Athens Marathon. In 2023, there are expected to be five times as many runners—and thousands more people cheering on the sidelines—all celebrating the power of human endurance and international community.
For more information on the Athens Authentic Marathon 2023, visit here.

Sightseeing on the Run: 5 Great Running Routes in Athens